Portland’s Greek Festival is only days away! 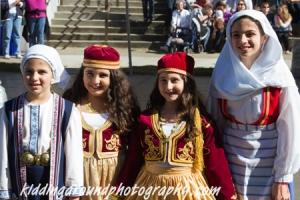 We love fall in Portland — cooler nights, falling leaves, and a taste of Greek food and culture at the annual Portland Greek Festival! It’s hosted by Holy Trinity Greek Orthodox church, whose members clearly love to celebrate! The festival is a ton of fun, and the food is amazing!

This year’s festival will take place from October 5-7 at NE Portland’s Holy Trinity Greek Orthodox Cathedral, a beautiful domed building with lots of ornate decorations and paintings, beautiful stained glass, and the smell of incense filling the vestibule. Part of the festival’s purpose is to educate the community about the church, and so they have priests there to talk to visitors and they also do free tours of the building. 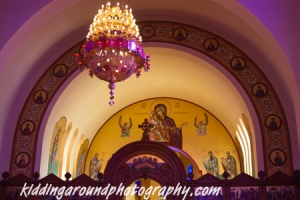 Greek immigrants first settled in Portland in the 1800s. Their descendants share their culture with the 15,000 or so visitors that attend the festival every year. Greek music plays constantly, and the festival hosts an imports area, cooking demonstrations, and many dance exhibitions throughout the weekend. I love seeing the traditional costumes and the children dancing. The younger ones are still just learning, but are so sweet to watch, and many of the older kids are very good dancers. Some bleacher seating is offered near the main stage. Since the seats often fill quickly, plan ahead if you want to sit down to watch the dancing. There isn’t really a lot of seating anywhere at the festival except in the catered dinner area. There, everyone gets a seat. Otherwise, it’s just a few scattered tables. 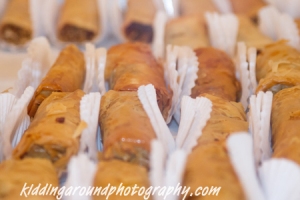 But the main reason I go to the Greek Festival is the food. Oh, the food. I think my blood sugar probably goes up just walking through the pastry section. One of my favorite treats at the festival is loukoumades. They’re kind of like little donut holes covered in sweet, sweet honey and doused with cinnamon to cut the sweetness just enough. I begin drooling over those things when the Greek Festival signs start going up around town in September! They’re made fresh all weekend long. Or until they run out.  don’t get there too late! Budget tip: a small order is big enough to share!

Pasta flora, kataifi, diples, paximadia, and more pastries are also available. Don’t know what any of that means? Don’t worry — they’ve got a cheat sheet! And of course, we can’t forget to pick up some of Jeff’s favorite, baklava, with its buttery layers of phyllo dough mixed with gooey nuts, cinnamon, and honey.

Those who prefer savory treats will also not be disappointed. There’s hummus and pita bread, steaming spanakopita, beautiful Greek salads with huge hunks of feta cheese, olive and cheese samplers, and lots of lamb — served up on a stick, in a sandwich, or on a platter. You can even watch whole lambs being roasted on the spit. Now that’s not something you see every day!

And if you need an adult beverage to wash it all down, take your talents (food vendors don’t accept cash, so head to the moneylenders booth to get these tokens first) over to the Taverna beer garden. They’ve thought of everything!

Delicious loukoumades smothered in honey and topped with cinnamon

Portland’s Greek Festival is one of the country’s largest, and it’s a fun fall activity that Portlanders have been enjoying for 67 years (it’s the second longest running festival in the city after the Rose Festival). If you’re in the area, put it on your calendar. And if you’re not from the area, October’s a great time to visit! Plan a trip! The loukoumades will be waiting for you, piping hot!

Fun festival? Quiet getaway? Whatever it is, enjoy your next travel adventure, whether it’s for a week or a weekend!