We love, love, love the US Virgin Islands National Park in St. John. However, unlike at most national parks, budget lodging in the USVI is pretty hard to find. There is one spot, however, that is comparatively quite budget friendly. In fact, if you’re much more intrepid than we are, it’s quite cheap.

Cinnamon Bay Campground is a lovely spot right on the beach that has cement block cottages, permanent canvas tents, and bare spot campsites for those who want to bring their own camping gear (the aforementioned intrepid travelers). Prices range from $163/night for cottage #10 (which is right on the beach) in high season to $37 for a bare campsite. Prices for cottages and canvas tents drop dramatically in the off season.

All accommodation types have access to shared bathrooms with cool water showers. Cottages have electric lights, a propane stove, and an ice chest (ice is available at the camp store). They also provide bed linens, towels, and cookware/dishes. The canvas tents have everything the cottages do except electricity. Bare sites have only a picnic table and charcoal grill. 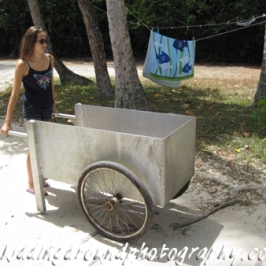 Interior of our cottage (sleeps up to 4). 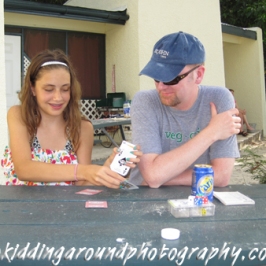 Our picnic table was good for meals and card tricks.

THIS is livin’!
One of the great joys of staying at Cinnamon Bay Campground is that you’re already at the beach! There are not a lot of beachfront accommodations on St. John, and certainly no beachfront budget options. Cinnamon Bay isn’t the best snorkeling spot on St. John, but you can certainly see lots of fish right off the beach there, and there’s some submerged plane wreckage that’s pretty cool to see just between Cinnamon Bay and Little Cinnamon Bay — an easy snorkel. Most of the time the water is flat calm there, but when the waves on St. John do kick up, there’s no better place to play. 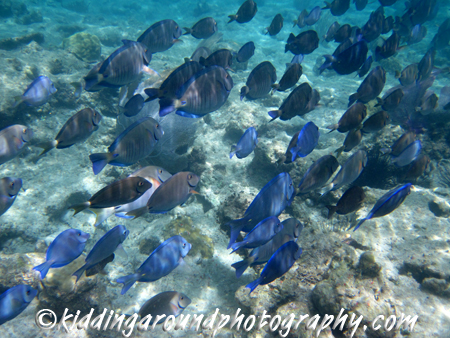 Fun in the waves!
We’ve stayed at Cinnamon Bay twice, with our two nieces on their 13th birthday trips, and both times we have opted for the cottages. We wanted a little more protection from the bugs, and it’s nice to have lights at night for playing games and things. Our cottages had plenty of room for four twin beds and a table with four chairs inside, plus there was a picnic table outside. The first time we went it was high season, so we were in one of the less expensive cottages — just a one minute walk to the water. The second time it was summer, so we splurged for cottage #10. We could see the water from our cottage. Amazing! Two of the cottage walls are cement and two are screen, so it’s like you’re outdoors at night, with all the sounds of the chirping insects. It’s one of our favorite lullabies.

There are some sand fleas or no see-ums or something that are pesky if you’re out on the sand at night, but otherwise, we had no trouble with bugs or critters. We did follow the advice of another traveler and sprinkled Gold Bond medicated powder in our beds because the bugs apparently don’t like the smell of it. We have no idea if it helps, but we figure it can’t hurt.

This is definitely not a four star resort, so if you need a pool, fluffy towels, your own bathroom, or a place that’s sand-free, this isn’t the spot for you. But it’s definitely more of a “national park experience” than staying at a hotel, it’s right on the beach (which is why we go to the USVI), and it’s much easier on the pocketbook. Since just getting to the island is expensive and since food is also expensive, even if you shop for your own groceries, staying at Cinnamon Bay Campground makes a trip to this magical place more affordable, and we’re always in favor of that!

Have a budget accommodation tip for a popular destination? Share it in the comments, and enjoy your next national park adventure, whether it’s for a week or a weekend!