Play on! Travel games – another inexpensive way to have fun on vacation!

Traveling can be very expensive, and we like to travel a lot, so it’s important to have some things we can do while we’re traveling that aren’t very expensive.  One very inexpensive thing to do while traveling is playing games.  While the license plate game is our favorite road trip game, other portable games are great for passing time when waiting for dinner to arrive at a restaurant or fun when you’re just hanging out, and they can be a great way to meet people.  We take only a few things with us if we’re just taking carry-ons, but you can play a lot of different games with just these few things:

The travel cribbage set’s deck of cards means that there are zillions of card games you can play, and last summer with one of our nieces we even did a few card tricks!  Its miniature cribbage board also offers kids great counting and adding practice!  Six dice allows you the flexibility to play 10,000 (also called farkle), Yahtzee (that’s where those cute mini scorecards come in), Cinqo, and others.  Be sure you bring the rules along if you’re not positive how to play any off the games!  We’ve made more than one frantic phone call to friends to clarify the rules to some game or

another.  Pass the Pigs is pure silliness, but it’s great because anyone can of any age or speaking any language can play.  We played with our nephews a few summers ago.  The three year old crushed all of us.  Repeatedly!

When we travel in the van or go to the beach or mountains, we have other games we really like to take with us, too.  Our faves are Quiddler, Set (both are card games), Rummikub, and Boggle. We also have a new favorite game called Qwirkle. These games are fun for two people or a larger group. Most of them are fun with kids, too.

If you’re staying in a hotel or hostel, play in the lobby or common room and invite some other guests to play with you. It’s a great way to meet new people and have fun together.  We once played a game of Scrabble at a hostel in Canada and players were allowed to make words in any language, since not everyone spoke fluent English.  It was on the honor system, so who knows if they were all real words, but it made for a very interesting and fun game.  (We did not pack the Scrabble game with us, by the way, it was available in the hostel lobby!)

Playing farkle in the USVI (it was too dark for snorkeling)

And of course we’ve written before about one of our favorites, the license plate game, which is a must on a road trip.  Nothing is really needed for that game except a piece of paper and a writing utensil.  Of course, now there’s an app for that!

Geocaching is another fun and free activity that fits in the game category.  And you can do it literally almost anywhere.  Geocaching is like treasure hunting, but mostly just for the thrill of finding the spot, not really for any actual treasure.  People all over the world create small caches in mason jars, ammo containers, Tupperware, old film canisters, anything, basically, that can be hidden in a smallish space.  A cache always contains a small logsheet or logbook for the finders of the cache to write on and usually has some little trinkets in it.  People who make a cache hide it somewhere then record the GPS coordinates of the cache on the Geocaching website so other people can then try to find it.  Most often the coordinates are best found with a real GPS, but an iPhone seems to work fairly well.  Sometimes the website also has clues.  We were looking for one at a rest stop in California this summer and were having a little trouble locating it, so we went to the clues.  When we read, “be careful of the rattlesnakes in the grass along the way,” we stopped looking for that one.  Geocaching is fun, but that seemed a little much. 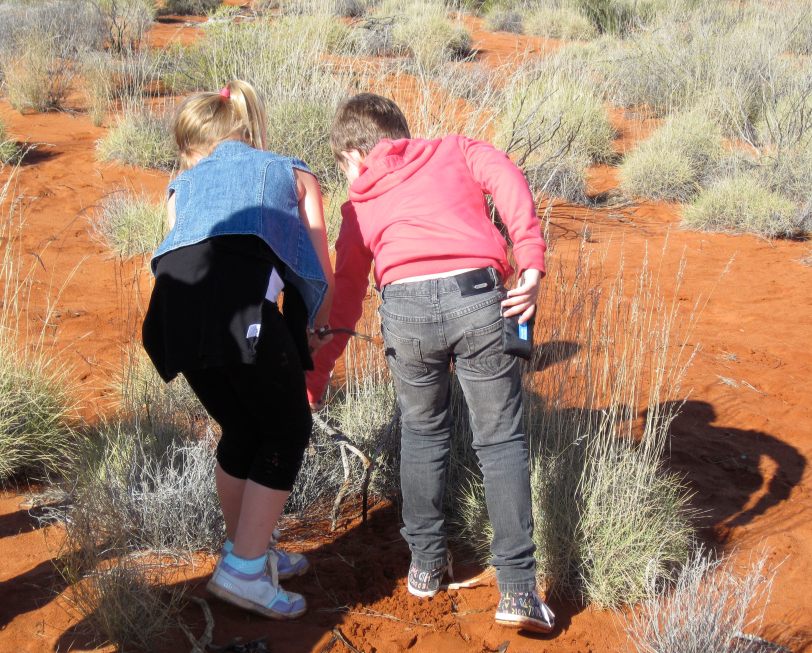 Kids love to geocache, too.  We spent more than an hour looking for a cache with some young friends in Australia, and although we never found it, they had a ball searching!

What are your favorite travel games?  Share with everyone by leaving a note in the comments.  And enjoy your week or your weekend!

6 thoughts on “Play on! Travel games – another inexpensive way to have fun on vacation!”