A few years back, we took a niece and two nephews (siblings aged 4, 8, and 10) on a road trip from Cincinnati (their home town) to Kentucky’s Mammoth Cave National Park.  We had a great time and we really enjoyed spending an extended period of time with them.  The trip rekindled our recurring conversation about how we’d like to take each one of our nieces and nephews on a big trip –one at a time– with Uncle Jeff & Auntie Erin. 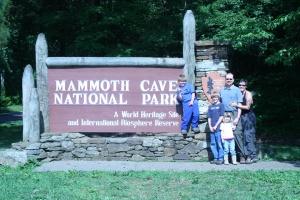 A lot of discussion ensued about when to take them — what age would be the best age?  13?  16?  18?  We finally decided that 13 would be about the perfect age.  Old enough to be independent, not old enough to have a job or boyfriend/girlfriend.  Old enough to be away from home for a week, not so old that they’re “bored” by everything.  13 year olds can be challenging, but they’re still kids and pretty playful.  (They also tend to be a lot less challenging when their own parents aren’t around!)  Now that we’ve done five of these trips, we’re convinced we made a great choice about the age.

Where to take them became pretty clear to us as our own travel patterns developed, too.  As we are on a quest to visit all 59 US national parks, what better choice than a weeklong trip to the US national park of their choice.  For us, that was the only requirement.  It had to be a US national park.  (Erin’s sister suggested that we bribe the kids to choose a park we hadn’t been to before.  We’re tempted, but we don’t.  As of this March, we’ll be 0-for-6.)

Hanging out with the moose at Denali Visitor Center

So, for their 12th birthdays, their gift is usually a book, DVD, and/or map of the National Park System — giving them a chance to decide which park they’d like to visit.  Since most 12 year olds aren’t well-traveled, it can be tough for them to select a park.  In fact, most have chosen a state (“Are there National Parks in Alaska?”) or a climate (“Somewhere with good beaches!”) rather than a specific park.  On the other hand, one was quite specific, choosing Montana’s Glacier without much hesitation.

Within a few months, we get the planning ball rolling.  One nephew did an overnighter with us, complete with a look at some short video travelogues of a few of the parks he was interested in visiting.  Before the night was over, he’d settled on Hawaii Volcanoes.  We’re heading there in March, and we can’t wait to see the sun!!!

As soon as the location’s settled, we look into airfares (ideally, eleven months in advance so that we can use frequent flyer miles to book our airline tickets).  We’ll contact the park directly, usually using their website, to request that brochures and an official park map be mailed to our niece or nephew (and another set to us, of course!).  We plan the trip, focusing on camping and nature — trying to capture the true park experience as best we can — but we do keep it within reason.  For example, packing all our camping gear for Alaska wasn’t really reasonable, so we chose to stay in a tent village, instead of a resort hotel.

Once on the trip, we cook as many of our own meals as we can (this adds to the “camping” idea and saves on cost as well – and when you’re talking about feeding teenagers, that can be important!).  We spend lots of time outdoors but also spend some time in the visitor centers, and we actually let them shop a little bit at the gift stores, too.  We even give them each fifty dollars at the start of the trip to buy souvenirs or treats.  We’ve found that a budget is very helpful, because they’re not always asking for things.  We’ve been impressed with watching them plan their spending when they have a limit.  We also spend time every day journal writing (grown-ups and kids), reading a book aloud (there’s a great National Parks mysteries series, and luckily there’s been one set in every national park they’ve chosen so far), and playing games.  We also do lots of laughing!  Kids cannot bring electronics on the trip, so no video games (one niece did bring her Kindle – hey, a librarian can’t turn that down!).

To cap off the trip, we have planned one special activity for each child.  In Glacier,  we went on a horseback ride.  One of the nephews went on a rafting trip in Denali.  Another went kayaking in Kenai Fjords.  In the Virgin Islands, we also went kayaking with one niece — a little less gear needed to kayak there — and the other one got to try paddleboarding.  We still try to keep the park experience in mind, but generally this last event is a little more touristy than most of the rest of the week.  As the paddleboard reminded us, it’s all about balance.

We have loved doing these trips with the first five, and we’re looking forward to the next three.  The youngest nephew is only four now, so we’ve got a while until we’re finished!  Do you have a family tradition like this?  If not, maybe you’d want to consider this one — It’s been awesome.  We’ll be glad to give you some additional tips and tricks, just leave us a note in the comments!

Erin REALLY wanted to do this tour in Glacier NP, so we splurged. What a blast!

Enjoy your week or your weekend with family!