The License Plate Game – there’s an app for that! 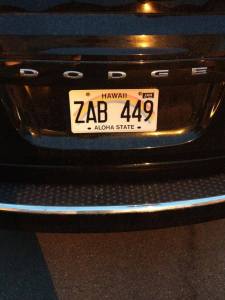 As we’ve mentioned before, we’re big fans of the license plate game. We play it on road trips of all lengths, even though we rarely win. On our 2013 cross-crountry road trip, we played and actually found ALL 50 STATES!! It had never happened before, so we were pretty excited. We used to scribble them down on a scrap of paper. For our national park trips with our niblings, we printed out US maps and highlighted each state as we found their plates. But now, there’s an app for that! Several of them, in fact. We tested five of them head to head!

Below are our reviews of the five different apps we tested — all of which we liked, but none of which had everything we’d have included if we were king and queen of the apps! (App developers, take note!) All these apps were tested on our iPhones. At least some of them are also available for Android. We hope you have as much fun using them as we do. (Update: in the three years since this post originally went live, it’s been the most popular one on our blog! Gotta love the license plate game!) 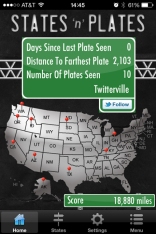 States and Plates – bonus miles for the Vanity Insanity game!

US Plates updates your progress

Believe it or not, there are even more apps out there, but these five are all fun and do the job. It’s a matter of whether you want some bells and whistles or you’re a utilitarian player. Heck, some people might even prefer the old paper and pencil method, and that works, too! If you have a favorite license plate game, leave us a note in the comments. Tip: parking lots in National Parks are fantastic places to hunt for plates!

Whichever method you use, we hope you find all 50 states on your next road trip, whether it’s for a week or a weekend! Drive safely.

The five apps we road tested

6 thoughts on “The License Plate Game – there’s an app for that!”