Crater Lake in Winter – photo by WolfmanSF via Wikimedia Commons

Over spring break we plan to check off three new national parks, leaving us with only eleven left to visit, but in February we went back to re-visit a park we’d only seen in summer, Crater Lake National Park. Nearly 8,000 years ago, a giant mountain in southern Oregon called Mazama erupted, creating a caldera that formed Crater Lake. At 1,943 feet (590 m), it is the deepest lake in the United States and the 9th deepest lake in the world. Due to its depth and water clarity, it is a stunning blue.

Crater Lake is a park that gets a lot of snow. For about 8 months of the year, Crater Lake National Park is covered in snow.  The average snow depth in deep winter is over 100 inches (2.5 m). Currently they have between 150-175 inches (3.8-4.4 m). I have always wanted to see deep snow there, and in the last few years I’ve become obsessed with snowshoeing there as well. It went on my 60 things to accomplish before turning 60 list. And finally, with the help of the good folks at Main Street Adventure Tours in Ashland, I crossed it off!

We met up with Main Street Adventure Tours owner Kim, a couple of his guides — Justin and Misha, and two other snowshoers early Sunday morning and headed up to the park. It’s about two hours from Ashland — or a little longer on snow-packed roads. We knew we could get into the park, but we weren’t sure if we would be able to get up to the rim. The road to the top had been closed several days during the week due to heavy snows, and they’d gotten quite a lot the night before as well. We took a rainbow we saw just before leaving Ashland as a good sign!  As we climbed up into the park, the snow began falling, and soon there was snow piled up on the sides of the road. Then the road itself was fully covered, and the banks of snow on the sides became walls of snow. Kim has an all-wheel drive SUV, and he said it was not a difficult drive at all, but as we continued up and up the snow-covered road, I was glad we weren’t driving! 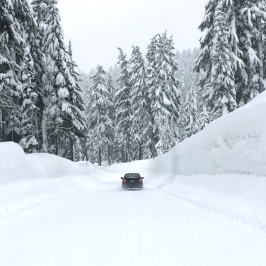 Walls of snow on the road to Crater Lake 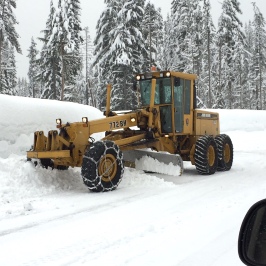 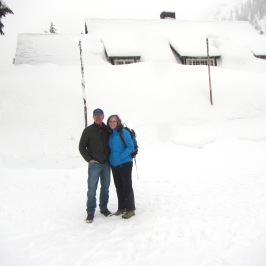 We entered the park at Mazama Village, and there was more snow there than either of us has ever seen. The buildings were nearly buried in it. There’s a visitor center there where we did a quick check on the road to see if we could go up to the rim. By some miracle, and the power of a John Deere plow, the road to the rim was open. All seven of us were excited! We were going to snowshoe on the rim of Crater Lake. Now please scroll back up and take a look at the beautiful lake in the first photo of this post — it will be the last you see of it in this post! This is directly from the Crater Lake website: November through April is assuredly snowy with poor visibility and fair to poor driving conditions, but wonderful skiing and snowshoeing opportunities. That pretty much described our visit perfectly. Had we never been to Crater Lake before, I am sure I would never have believed there was a lake there! 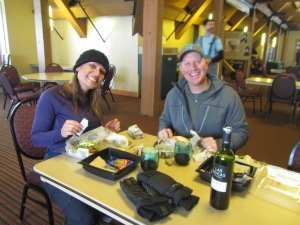 Before we went out for our snowshoe, we stopped at the lodge and ate the delicious lunches provided by Main Street Adventure Tours to fortify ourselves. Our new role models for traveling, Judd and Regina, even brought along wine! And Justin, one of the guides, brought a cookstove to make tea. We are definitely going to have to step up our game a notch if we’re going to hang with these kind of adventurers. Simple gorp just won’t cut it!

After lunch we all strapped on our gear and headed out. It was snowy and blowing, but we were undaunted. We followed Justin’s lead and headed out along the rim trail. Kim followed up at the rear, and Misha hung with the crowd in the middle. We all stayed pretty well together, though. And we stayed well away from the edges of the trail to avoid the precarious cornices of snow. Although we could not see the lake at all, it was still a gorgeous winter wonderland of a day. The trees were completely encased in snow. Someone said it looked like we were in Narnia, and it really did. The scenery seemed almost fake it was so beautiful. 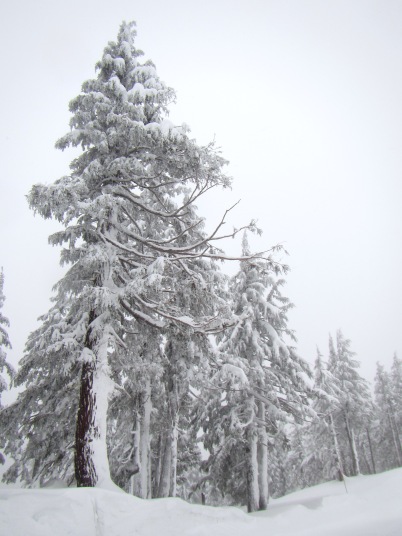 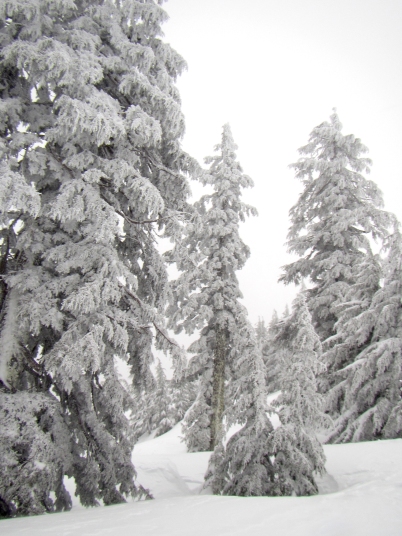 Snow covered every side of these trees. 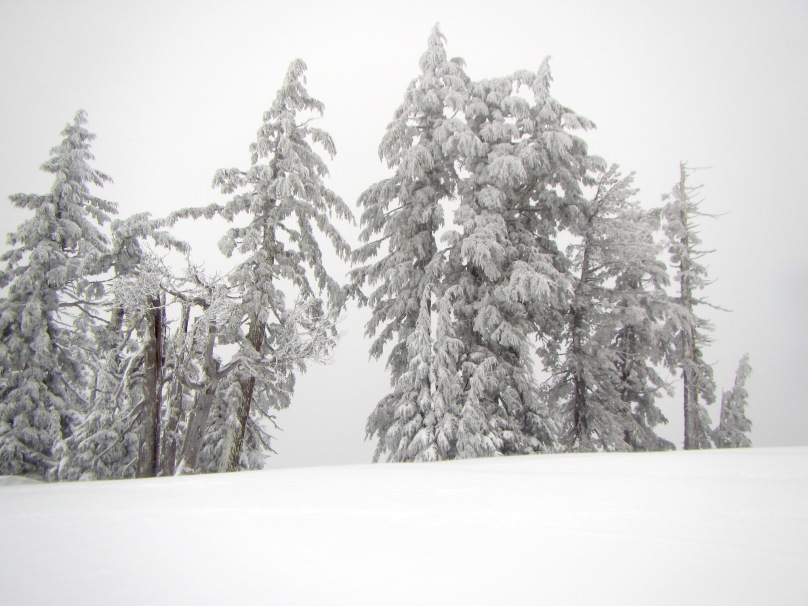 See the lake just behind the trees?

We had a great time with our group! Everyone was excited and having fun. Justin had a ball running up the snow hills. Regina and I both managed to fall down, but both just laughed at ourselves. Jeff and Judd enjoyed the flask of Fireball that our new best friends also brought along with them. And luckily Jeff did not actually fall off the edge into the lake. 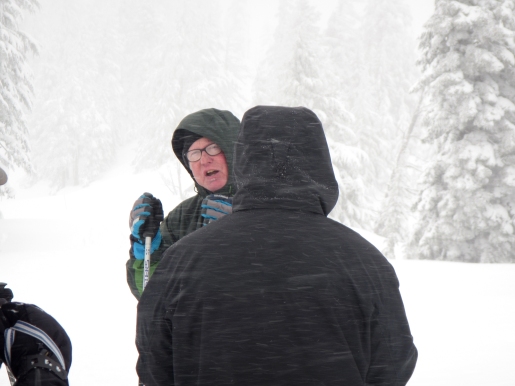 Kim giving us safety info as we started out. 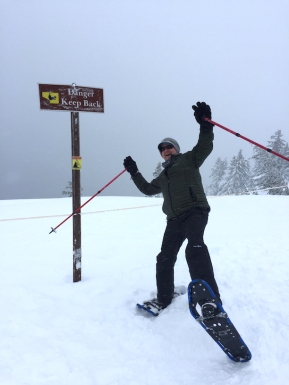 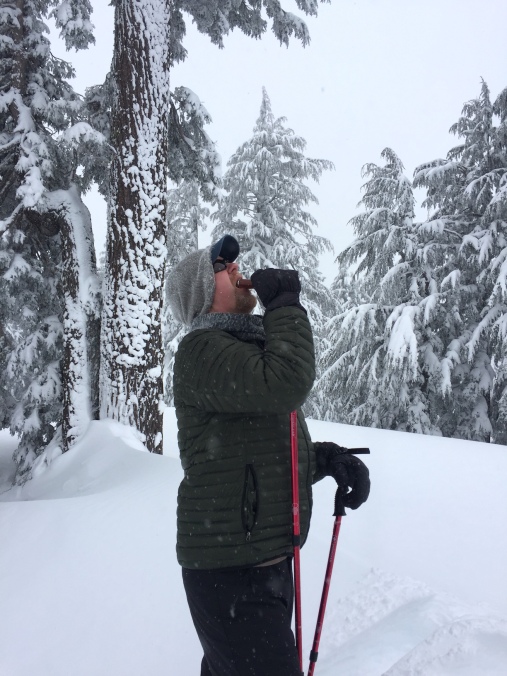 Jeff warming up from the inside out! 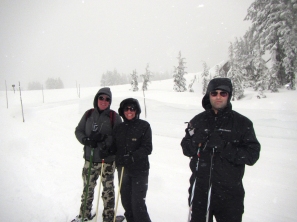 Our guide Misha with Regina and Judd, ready to roll! 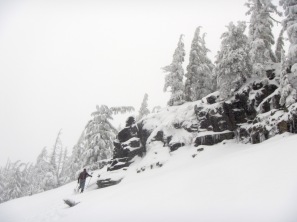 Justin running up a hill in snowshoes! 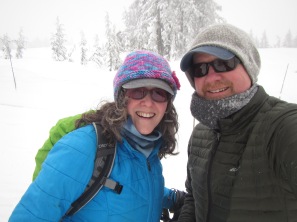 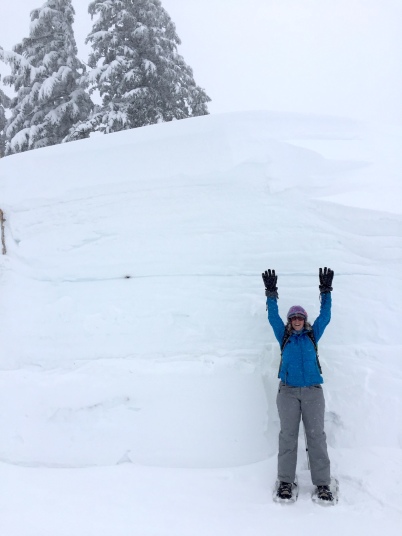 The wall of snow was easily twice as tall as me! 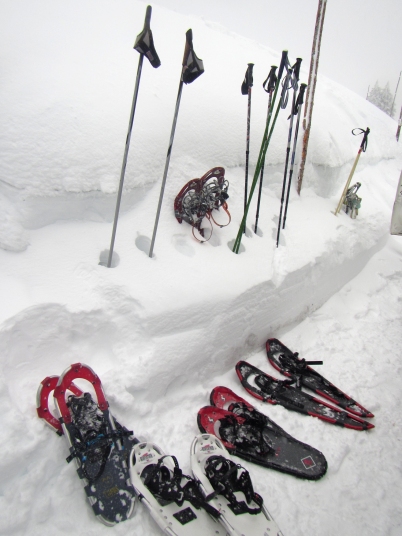 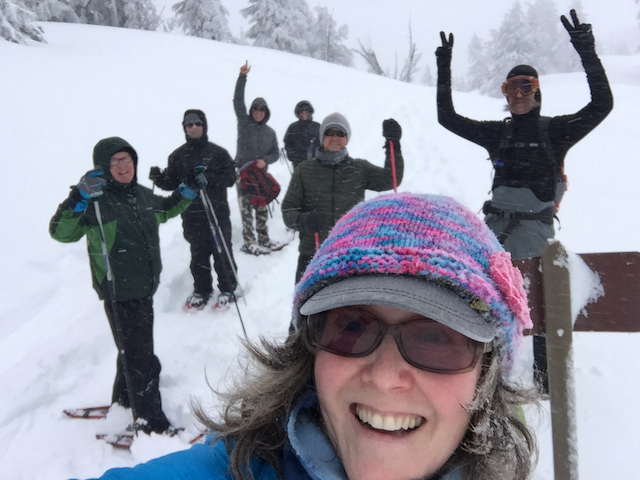 We often go adventuring on our own, but we really appreciated just having to show up to this adventure and enjoy the day while Main Street Adventure Tours did all the work for us. Kim and his guides did a terrific job. They not only kept us safe, but we learned a ton about the area as we travelled up to the park and back. We’ve found in the past that having a knowledgable guide can really enrich your experience of a place. This experience was a testament to that. Kim knows a ton about the area and it was very interesting to hear his tales of the people, animals, and places.

If you’re thinking of heading to Ashland and are looking to explore the area, consider one of Main Street Adventure’s tours. They do Crater Lake trips all year-round as well as many other tours (including wineries!!). And if you ever get a chance to snowshoe in  Crater Lake, definitely do it!

Enjoy your next winter wonderland adventure, whether it’s for a week or a weekend!

This post was sponsored by Main Street Adventure Tours.  However, all opinions are our own.