One of our favorite rangers

Tucked into the southwest corner of Colorado, Mesa Verde National Park sits high atop the — you got it — mesas of the Four Corners region. The park is famous for its Ancestral Puebloan cliff dwellings and other structures, and the National Park Service offers guided ranger hikes through several of them. We explored three of the amazing historical structures in this way, learning a lot about their inhabitants while having a unique park experience!

Two of our rangers, Ted, and Paul, were knowledgeable and approachable, and a third, Lyndsey, was also a natural comedian! Before we entered the cliff dwellings, each ranger explained the history of the ancestral people who moved from the mesa tops into the cliffsides.

Once inside, they described the construction process, the use of the rooms, connections to modern tribes, and the nature of archaeology: using ancient clues to attempt to understand the past. As they pointed out, we’ve learned a lot about these people from what they left behind, but there’s still a lot we don’t know.

These amazing structures have survived for a millennium, and seeing them up close — walking through their rooms, climbing through their doorways, and peering down into their ceremonial kivas — was impressive and thought-provoking. 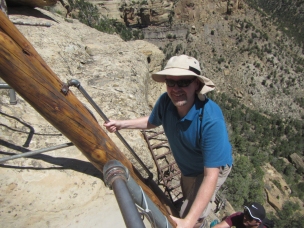 Ladder view from the top

One of the many ladders

Here are some details about the three tours we experienced:

Named for the balconies built between the floors of its structures (some of which are still intact), the National Park Service describes the Balcony House tour as the most adventurous ranger-led tour in the park.

Jeff crawling through a tight spot

Not strenuous, but also not for the feint of heart, this hour-long, 0.25 mile (0.4 km) tour involves walking along a paved trail and descending a staircase before climbing a two-story wooden ladder and wedging through a narrow space between a masonry wall and the cliff itself.

About halfway through the tour, the tour climbs a three-step ladder and a smooth rock slope (using the original carved toeholds) and crawls through a “tunnel” about 18″ (46 cm) wide (actually two doorways with a dark chamber in between that was tall enough to stand up in). All the while, the ranger tells about the dwelling and the people who lived there.

The tour ends with a final ladder and toeholds to climb — with a handy modern chain railing to hang onto!

Long House is tucked into the side of Wetherill Mesa, on the west side of the park. (This area formerly hosted a six-mile, one-way tram tour. While the tram road is still open to hikers and by bicyclists, the park no longer offers a tram tour.)

The 2.25 mile (3.6 km), out-and-backhike follows the level, paved tram road across the mesa top, through an area affected by the Pony Burn of 2000. The wildfire killed most of the trees on the mesa, leaving behind their scarred trunks and taking away the shade. Grasses and Gambel’s oak have filled in, but grow low to the ground, leaving incredible views for miles in every direction.

The tour passes an unexcavated archaeological site before leaving the pavement and passing an Ancestral Puebloan-built check dam (hundreds of each still exist in the park). Finally, it descends a staircase to the Long House site itself.

Inside Long House, the tour climbs a couple of short ladders and explores the cliff dwelling before retracing its steps to the tram road. We opted to continue down the paved path toward a hiking trail that led back to the parking lot, and were rewarded with a quiet walk — with lots of birds — that wasn’t any longer than backtracking along the road with the group. 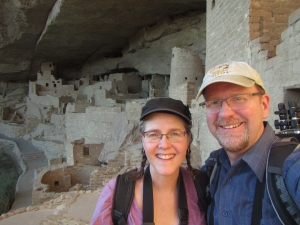 While the park’s daytime tours have groups of 30 or so, this 90-minute tour is limited to 10 people. The ranger does an abbreviated interpretive talk, leaving plenty of time to explore the dwelling on your own and, of course, to take photos!

The small group size alone makes the tour worth $20 per person (versus $4 for the others), but having time to really examine — and photograph — the site in the warm twilight made this tour a great value.

Our ranger pointed out some interior plastered walls that still feature original paintings (!) and freely answered everyone’s questions. While only two or three in our group of ten were serious photographers, everyone seemed to enjoy the relaxed pace of the tour and the opportunity to explore the ruins on their own — and to take plenty of photos!

The tour starts out by descending a narrow stone staircase, and has one short ladder to climb. The way out involves a taller, steeper ladder, more carved toeholds, and a steep stone staircase that returns to the parking lot.

Reservations are required for most park tours. There is a two day advance maximum for the daytime tours, and tickets are not available online. Avoid the long ticket line at the visitor center by stopping at the Colorado Welcome Center in Cortez to book your daytime tour reservations!

The twilight photography tour — and several other unique tours — only accept online reservations, so be sure to book well in advance!

We really enjoyed learning about — and exploring — these ancient cliff dwellings with the park rangers, and highly recommend going on at least one tour while you’re at Mesa Verde.

Which ranger-led tours have you enjoyed at Mesa Verde or other parks? Leave us a note in the comments, and enjoy your next national park adventure, whether it’s for a week or a weekend!