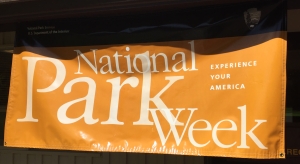 Last week was National Park Week in the US, a week to celebrate the national parks for free. We hope many of you had a chance to explore one of the 400+ US National Park units!

As we’ve mentioned before, all fourth-graders in the country can receive a free national park pass for their families this year. This year, I’ve had my fourth and fifth graders spending their library time studying the national parks with me. We have explored the NPS website & the World Book online, pored through maps and brochures, read books, and watched movies. Currently each one of them is researching a specific national park in order to create a display board to share with the class. It has been an interesting and exciting year!

I thought that since we had spent so much time studying America’s national parks, it would be really cool to take them to one of the national park units in our state. Since they also study Lewis & Clark in their social studies curriculum, Fort Clatsop, part of the Lewis & Clark National Historical Park and where the Lewis & Clark expedition wintered over, seemed like a good fit. Last Friday, the Blue Star buses pulled up to our school and 60 giddy 4th and 5th graders headed to the Oregon coast!

We made a quick stop at Fort Stevens State Park (an awesome park for camping — with nearby Kamping — by the way) because, although we live in Oregon, many of my students had never seen the Pacific Ocean!

Learning from the interpreters

The folks at Fort Clatsop — not quite a two-hour drive from Portland — had a great four-station program lined up for the students. At one station, they showed them some short movies about the importance of fire at the time of Lewis & Clark, how Lewis & Clark made bullets, and other interesting things.

A second station consisted of a visit to the excellent little museum they have at the fort. The museum has a replica canoe and other authentic and replica artifacts from the Lewis & Clark expedition. Students explored the museum to find different artifacts while answering questions about events, places, and people who stayed at the fort.

Another station allowed them to explore the flora of the area. Small markers with information about important plants are situated along a trail that heads down toward Lewis & Clark’s original canoe landing. Students read about the different plants and completed scavenger hunt sheets complete with word puzzles! Many of the students had also never seen such tall trees as the ones at Fort Clatsop!

The final station was the actual fort area. It is of course a replica — the ranger called it “Fort Clatsop 3.0” because this is the third time that they’ve had to rebuild it! The students loved exploring this area — checking out the bunk houses and the other rooms. Ranger Tom, dressed in typical clothing of the time, gave a little presentation in Lewis & Clark’s room. Its elk skull and a discussion of how they had to eat rotten meat because it was all they had were both big hits. Seeing the Christmas gift to the 33 men who were with Lewis & Clark — a rope of tobacco that looked like a lump of dog poop — was also a big hit with the kids!

The rangers really knew their audience. That’s one of the really great things about our national parks — they definitely have a lot of activities and presentations targeted to all types of audiences. I doubt that the military group from Washington’s Fort Lewis experienced the same program Friday morning that the fourth and fifth graders did Friday afternoon! 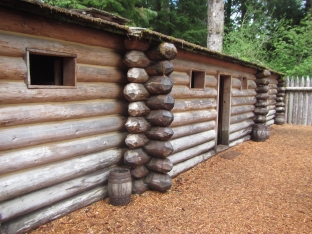 Replica of the original fort

Replica of a Lewis & Clark canoe 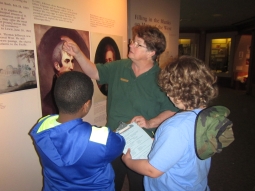 Learning history from the park interpreters

The grand finale was a shooting presentation where Ranger Tom fired off a gun just like those used by Lewis and Clark. Well, actually he tried to fire it off but it didn’t go off the first time. They told the kids that one out of four times it didn’t go off and you just hoped that was not the time the grizzly bear was charging at you! The second time he tried it, it did go off and it was very exciting. It was a great way to end their 2.5 hours at the fort.

Several of the students and teachers told me this was the best field trip they had ever been on. I was really happy that they had a chance to explore one of our national parks and see things that they normally do not get a chance to see. I hope it is something they will always remember — that time the crazy librarian took them to the ocean and to a national park. Who knows, maybe some of them will get bitten by the national park bug and try to visit all the national parks, just like us!

Enjoy your next national park adventure, whether it’s for a week or a weekend!