An impromptu trip to London – tales and travails

This week we invited our friend Sarah O’Donnell to write about her recent visit to London.  She has some great insights to tuck away for future reference in your travels!

This Christmas, my mother, sister and I decided to take an impromptu trip to visit my younger sister in the UK. Our trip was pretty relaxed and we had a wonderful time experiencing the city of London, Bath and the surrounding countryside, and Dover. This was our first trip to Europe and we were excited to see and do it all. Because this was our first trip, however, and we only spent a few weeks planning for it, the trip was a total learning experience. Here are a few lessons we picked up along the way: 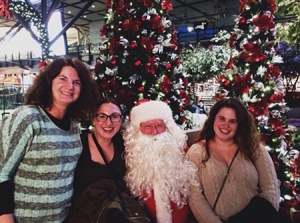 What do you do when you’ve missed your plane? Ask Santa for a ride in his sleigh, of course.

Don’t travel over Christmas. We knew ahead of time that several attractions would be closed over Christmas Eve, Christmas, and Boxing Day, but I am not sure that it totally sunk in until we were actually there. Nearly everything that we wanted to do was closed. It didn’t help that our luggage was lost and our flights were delayed so that we didn’t actually arrive in London until Christmas Eve, meaning that our first few days were spent trying to find something open and weighing whether cab fare was worth whatever was (public transportation is closed on Christmas and runs limited hours on Boxing Day). And since we were staying in a rental instead of a hotel room, we didn’t have access to a concierge or local knowledge. Thankfully, we had Internet to do some research, but in the future, we plan to spend Christmas somewhere we know and save the new adventures for a non-holiday.

For short stays, hotels trump rentals. There were a few factors that we considered when choosing where we would stay. We wanted something affordable, as central as possible, and near public transportation. Since we were to be in London for Christmas Eve, Christmas, and Boxing Day, we also wanted to be sure that we would have access to food. We ended up choosing to get our housing through a vacation rental site (AirBnB, OneFineStay, VRBO, HomeAway, etc.) so that we would have our own kitchen and some space in case we spent a day in. 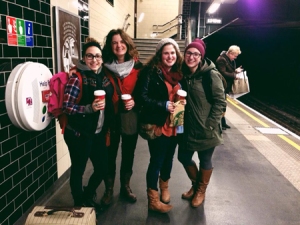 Sisters Meghan, Emily and Sarah with Mom Shannon waiting for the Underground

Choosing central housing near public transport turned out to be a good choice. Requiring a kitchen, however, did not. The idea of getting groceries and making breakfast or dinner is nice and definitely would have been more affordable, but meals ended up being a major part of our experience. We were in a new city and so we wanted to be out in it! Even on Christmas, we were happy to get out and walk to that single open restaurant. It might have been different if we were in London for longer than a week, but we weren’t, and it might have been helpful to have access to hotel staff.

Eat well. Choosing where to eat was one of the best parts of the trip! Food in London was expensive, but it was also really fun. Whether we chose a traditional pub, a café, or something a little trendier, we were rarely sorry. But in addition to finding an interesting restaurant, it was equally important that we eat something nutritious. We didn’t punish ourselves, but choosing food that gave us lots of energy was definitely to our benefit. Each morning we ate a late breakfast and were sure that it included protein. This gave us energy for all of the inevitable walking and held us over until an early dinner. This schedule had us only paying for about two meals per day, and we were never hungry because we were eating hearty and nutritious meals. 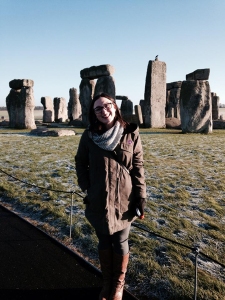 Plan, plan, plan…but be flexible. Because our trip was somewhat last minute, we planned in a hurry. I found that using an itinerary planning website/app extremely helpful. Tripomatic is an online application that can be printed out and downloaded to a smart phone. It allows you to map out each day and write notes under each activity (such as opening times, prices, and contact information). It also calculates travel time between each activity. An added feature that we did not take advantage of, but that would have been very helpful, is the possibility to download maps of each day that would route how to get from location to location. Downloading the maps to my phone would have saved us valuable time trying to find wi-fi to map a route to our next activity.

Enjoying the sights of London with my mom.

Though we had lots of plans, there were days when we were tired or found something else that we wanted to do. In the future, I would definitely leave a flex day at the tail end of our time in each city to include anything extra or to push activities that had to be cut out earlier in the trip. This is also helpful in the off chance something goes wrong (such as flight delays or lost luggage).

When your luggage doesn’t arrive, an emergency shopping trip is in order!

Pack light and keep the essentials with you. Did I mention that most of our luggage was lost and that our flights were delayed? Thankfully we had the essentials packed in our carry-on luggage (a precaution that I cannot over-endorse).

The luggage was lost so long it finally had to just be shipped directly home by the airlines!

One thing I did learn from the lost-luggage situation is how little I really need. In the course of three and a half weeks I got along with three comfortable, basic shirts that were casual, yet restaurant/museum appropriate, a pair of running leggings, and two pair of regular leggings that I wore under a stretchy, black skirt. My only shoes were boots (though I could have done with some tennis shoes) and I had one coat, a scarf and some gloves. This was enough to keep me warm, clean, and satisfy my sense of style (we were in London and Bath, for heaven’s sake!). Most of these things were purchased when we arrived in the UK and are being reimbursed by the airline.

Investigating the castle ruins with my sister.

Overall, we had a really lovely time. Our first overseas trip was not only memorable and exciting, but taught us a lot about being foreigners in a new place. The UK was a wonderful introduction for us and we are excited to take our lessons learned and apply them to our next adventure!

Thanks so much to Sarah for writing for us this week!  You can follow Sarah’s adventures far and near on her Twitter account, @sodonn. If you have tips for travel over the holidays or at any other time, leave us a note in the comments, and enjoy your week or your weekend.