Whooo saw snowy owls on the Oregon Coast? We did!

The other day I saw that one of my friends had posted some pictures of snowy owls on her Facebook page. My bird nerd meter went on high alert. We’d heard there were snowy owls in Lincoln City, Oregon, last year and tried to go see them, but we had no luck. This year I was hoping it would all work out. I immediately asked my friend where she’d seen them, and she told me where they’d been and also posted some links with more information (thanks, Jen!!). It was one of those links that led us directly to our two owls!

Jeff- geared up for the rain

I often get confused when we go looking for wildlife and think we’re going to the zoo, expecting the animals to be right there when I arrive. And even though I gave myself the this is not a zoo talk before we arrived, I was admittedly bummed when there was no evidence of them from the parking lot. The rain was pelting us and the wind was whipping, but we geared up ourselves and my camera equipment (I use a Storm Jacket camera cover and a Sea to Summit backpack cover, both of which are excellent products) and headed off to cross the wetlands. Thank goodness I also had my killer Däv rainboots, because it was really mucky out there. Let’s just say that those of us who didn’t have rubber boots had wet feet. Not mentioning any names.

This is one of the few times we’ve really felt like we were serious birders. There were no birds in sight, we had out our compass to make sure we were headed in the right direction, we were traipsing through a wetland in the pouring rain, and we were on a quest.  It was really kind of exciting. And really, really cold. Since I had the boots, I went ahead, hoping with every step I’d see a flash of white and that if I did I would not scare it off. And then, there it was. A bright white spot ahead. Was it the bird or a piece of trash?  I couldn’t tell, and I didn’t want to go any farther because there’s nothing worse than two people going birding when only one of them gets to see the bird. So instead I backtracked and made frantic hurry up motions to Jeff who was trying to find a dry way across.

We went around the corner slowly together, and this is what we saw!

Our first ever snowy owl in the wild!

Snowy owls are not endangered; their status, in fact, is that of “least concern.” They spend summers up north of the Arctic Circle, taking advantage of lots and lots of daylight to hunt and fatten up, and then they fly south in the winter. But the thing is, they don’t usually come to Oregon. Last year they did, and apparently this year they’re back, but it’s pretty unusual. Another unusual thing about snowy owls is that they’re diurnal, so they hunt in the daytime and at night. That’s lucky for us, because they’re not holed up somewhere during the day! You can read lots about the snowy owl at the Cornell Lab of Ornithology site, here.

The first owl was a bit skittish and flew off before we really got anywhere close.

But while we stood looking toward where that owl had flown, another one flew across. Now we’d seen TWO snowy owls in the wild. SO lucky! Because we were much closer to where we’d seen the first bird, we waited quite a while to see if that first bird would come back — birds often have particular spots they like and will return to them if you’re patient — but when it didn’t seem likely, we decided to walk over toward the second bird and see if we could get closer. Luckily, that bird had no problem with us getting close enough to get some awesome photos (with a 400mm lens). We walked quietly and slowly, just

a few steps at a time, and watched the bird to see if it seemed to be getting agitated. A few times it started doing a funny head bobbing thing and seemed like it was going to take off, but it didn’t. When that would happen, we stayed still for a long time. I think the best thing about watching the owls was seeing them turn their heads around. They would lock on us for a ten or fifteen seconds or so, then turn their head sideways so we’d see just one eye for ten or fifteen seconds, then next thing we knew, we’d be looking at the back of their heads. It’s just one of those things that’s fascinating as a kid and I, at least, am still 100% fascinated with.

We stood in the cold (luckily the rain finally died down) for about an hour watching that owl, but I honestly didn’t really feel the cold until I got back to the car. It was exhilarating out there watching those wild birds. If you’ve never seen wild snowy owls, grab your rubber boots and your binoculars (you don’t need binoculars to see these guys, they’re so big, but it does enhance the experience), and head down to Jetty C at Fort Stevens. It’s an experience you won’t forget!

If you are just getting into birding and have an iPhone or iPad, you might want to check out the iBird Pro app. It’s about $15, which is the most we’ve ever paid for an app, but it’s amazing. You can plug in different characteristics of a bird and your location, and it will pop up all the possibilities for what that bird might be. It also has photos, audio files of the birds’ calls, maps, and information about the birds. And it’s an app, so you don’t need to be online to access it. It’s not just for beginning birders, either. We love it and use it quite often.

And of course the librarian in me cannot help but mention two books about birders if you want to sort of get into the heads of the mega birders. One book is The Big Year: A Tale of Man, Nature and Fowl Obsession by Mark Obmascik (which was also made into a pretty good movie). The other is To See Every Bird on Earth: A Father, A Son and a Lifelong Obsession by Dan Koeppel. Both of them are fascinating stories about people who have, as noted in the titles, an obsession with birding. We’re not quite to that point, but we really do have fun doing it. It doesn’t cost much (pay no attention to the new camera body I just bought last week…), and you can usually find birds wherever you go.

Here are some last shots of the owl for you (click on any of the pictures to make them bigger). Enjoy your week or your weekend, and Happy New Year! 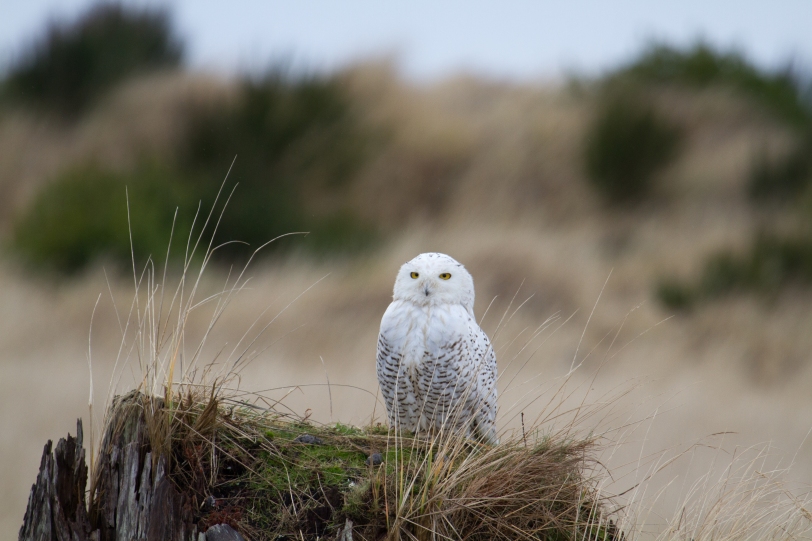 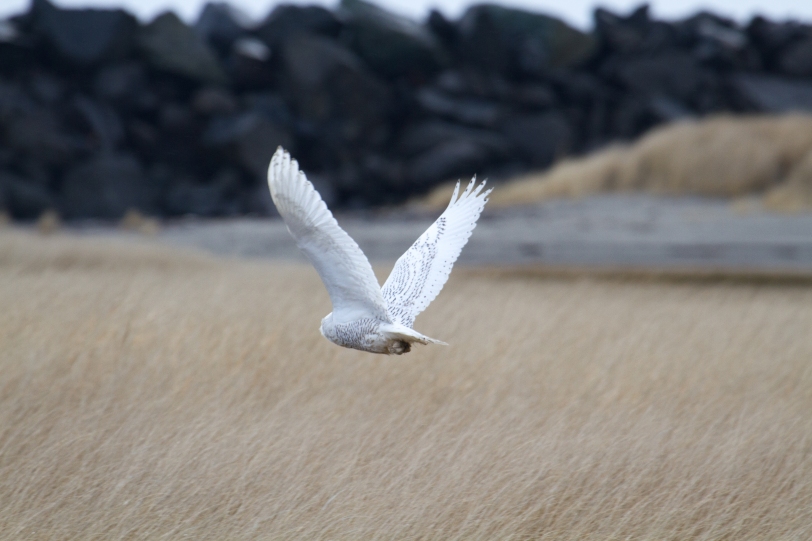 5 thoughts on “Whooo saw snowy owls on the Oregon Coast? We did!”