This week we’ve invited M. Kim Lewis, co-owner of Main Street Adventure Tours in Ashland, Oregon, to write about snowshoeing at Crater Lake National Park. (We were hoping to actually go on this snowshoe trip, but Jeff hurt his back and we had to postpone our trip!) One day we will do it, but in the meantime we can all enjoy the trip vicariously via Kim’s great post! 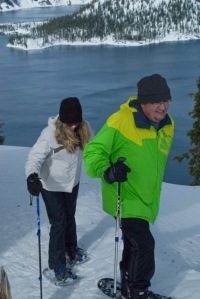 If you can hike, you can snowshoe!

There’s no better way to see Crater Lake National Park in the winter and spring months (December through May) than by snowshoeing — the fastest growing winter sport in the world, according to the Snowshoe Institute of America. And on a weekend in mid-February, we experienced just that — an ultimate Crater Lake adventure.

Many folks think of Crater Lake as a summer or fall destination, yet it might be time to change your mind. If you can walk and dress in layers, you can succeed at an awesome nature outing on a beautiful blue sky sunny day! The road to Crater Lake’s Rim Village is open year-round, as is the Steel Visitor Center. Plus, very friendly and helpful park rangers will welcome you every step of the way (ed. note: as they do in all US national parks!). 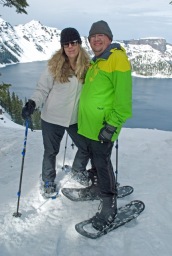 Crater Lake and Wizard Island in the background

In February, we guided a day-long tour for a couple from Redding, California. Before we left, they said that they’d “never done this before in the winter and the amount of snow that has fallen this year should make it amazing.”

“Amazing” was the correct description indeed. It’s all about the view at Crater Lake, and as we strapped on our snowshoes and stepped up to the edge, we were captured by a state of jaw-dropping, snow-covered beauty! The Medford Mail Tribune reported that Crater Lake National Park broke a 67-year-old record for December snowfall in 2015. According to the National Weather Service, 196.7 inches of snow fell at the park in December, breaking the previous record of 196 inches set in December, 1948, when Harry S. Truman was president and Alaska and Hawaii had not yet earned their statehoods.

The nice thing about modern snowshoes is that they can take a person safely just about anywhere they wish to go by suspending a person on the top of the snow. We hiked for about two miles along the 30-mile perimeter of the lake to see a variety of caldera. We looked right down onto Wizard Island, named by an original superintendent of the park, William Steele, who said it looked like a witches’ cauldron. Wizard Island, a water-surrounded cinder cone with its own crater on top, rises up within Crater Lake’s caldera.  (Crater Lake itself is the water-filled caldera of a huge volcano that collapsed after erupting nearly 8,000 years ago.) 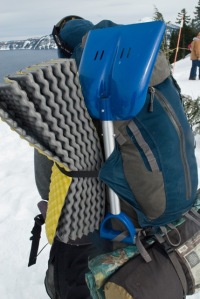 Early on in the day, we met up with an ambitious foursome of snowshoers who took their Presidents Day Weekend to hike the perimeter of Crater Lake and snow camp. Yes, I said camp in the snow! As I chatted with them, I discovered the women were life-long schoolmates and friends. They and their beaus decided to meet-in-the-middle of their respective Bay Area California and Seattle homes. With pre-prepared foods, cook stoves, safety directional devices, snow shovels, ice picks and warm sleeping bags, pads and tents, they were jubilant to be on their way.

On the drive back home from Crater Lake to Ashland, our happy guests were holding hands — real sweethearts who had welcomed the adventure and the companionship. It was clear that they had enjoyed a truly amazing day!

Snowshoe hares (Lepus americanus) can be seen at Crater Lake

M. Kim Lewis and his wife Ginny live in Ashland, Oregon, overlooking the Cascade Mountains. They started Main Street Adventure Tours in 2005 to transport and guide destination travelers around their home region of southern Oregon. Kim is a published writer and photographer for such magazines as Oregon Wine Press, Jefferson Public Monthly (an associate of National Public Radio), the San Francisco Chronicle, and others. We’re glad we could share his adventure with our readers, and hope that your next outdoor adventure is as great as this one was, whether it’s for a week or a weekend!

One thought on “Snowshoeing in Oregon’s Crater Lake National Park”