Safari on a Shoestring in Sri Lanka

This week, we’ve invited our friend Miranda to share her experience on safari in the island nation of Sri Lanka. Miranda’s adventure was part of a fantastic around-the-world trip that really made the most of her travel time and budget! We hope you enjoy reading about her adventure as much as we did! 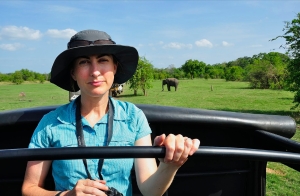 Miranda on safari in Sri Lanka

For years, I’ve drooled — not literally, but nearly! — over photos of African safaris. I’ve imagined myself watching elegant giraffes, lazy lions, and lumbering elephants from the back of a Jeep. I’ve browsed my way to websites advertising tented camps and private wildlife reserves.

Then I checked the prices, and my safari dreams evaporated. As a budget traveler, the cost of an African safari seems astronomical, often $500 per person, per night, or more. Then there’s the cost of flights, not easily purchased with frequent flyer miles. Though I’m sure it’s possible to do some parts of a safari trip on the cheap, Kenya, Tanzania and the like didn’t seem to be the best destinations for independent travelers. South Africa’s Kruger National Park might be more manageable, but the whole prospect appeared daunting, and expensive. Anyway, my husband and I were planning a long trip to Asia, so I put safaris out of my mind.

When I started reading accounts of trips to Sri Lanka, a jewel of an island just off the tip of India, I was intrigued. Until 2009, the island was engulfed in a bloody civil war. With the conflict ended, tourism is now surging. Sri Lanka’s attractions are many: eight UNESCO World Heritage sites, tea plantations, historic trains, ruins, so many temples, unspoiled countryside, national parks, and some of the friendliest people you’ll ever meet. But what especially interested me about Sri Lanka was its biodiversity and opportunities to go on budget safaris.

We spent 12 days in Sri Lanka as part of a much longer trip to Europe and Asia. A highlight of the whole summer was the three days we spent on safari at Minneriya, Yala, and Uda Walawe National Parks, though the rest of Sri Lanka was wonderful, too. You won’t see giraffes or lions, but wild elephants were plentiful. Smaller than African elephants, and mostly without ivory tusks (tuskers, as they are called, are very rare), the elephants of Sri Lanka are breathtaking nonetheless.

We began in Minneriya, in the north central area of Sri Lanka. Our safari driver picked us up in the mid-afternoon, the best time to find the elephants. We rode for awhile along rutted dirt roads — all three safaris left us jounced, bounced, exhausted, and covered in dust — and arrived at the water (or “tank”, a large artificial lake) only to find … no elephants! Finally, our driver spotted something far in the distance. We turned around and headed in that direction. A few minutes later, the driver called back to us, “Do you like elephants?”

There they were, so close we could see their wrinkled skin and huge eyes. We snapped photos of the beautiful creatures as they ambled past us toward the edge of the water. Along with a handful of other safari vehicles, we headed toward larger groups of elephants, including several young ones. We watched them play in the water, spraying each other, and kicking at the grass to loosen it before eating. More tourists arrived, and I started to worry that the elephants would feel harassed by so many Jeeps. We took photos and videos for about 45 minutes before heading back out of the park.

Before we left Minneriya, though, we had one final encounter. The driver heard a rustling and stopped suddenly in the middle of the road. Within seconds, the trees parted and a herd of elephants streamed out onto the road, headed toward the water. One by one, massive elephants lumbered by us, just a few feet away. It was an amazing moment, one that made it all worth it as we washed away the dirt and aching muscles back at our guesthouse.

We also saw other wildlife at Minneriya — birds, a crocodile, lots of lizards, and water buffalo — but the elephants were definitely the focus.

About a week later, we took our second safari, this one at popular Yala National Park in southern Sri Lanka. This one was a little more expensive, but still reasonable. We opted for a full-day safari to maximize our chances of seeing a leopard. This meant leaving the hotel before dawn, taking a long lunch break on a river bank during the heat of the day, and then returning near sundown to look for more wildlife.

Yala yielded far more diversity than Minneriya — jackals, wild boar, birds, crocodiles, water buffalo, and much more. We saw a few elephants wading into a pond to munch on lotus leaves, but it was nothing like the herds we saw in Minneriya. 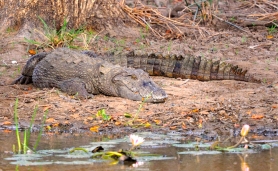 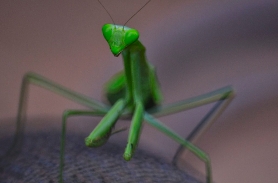 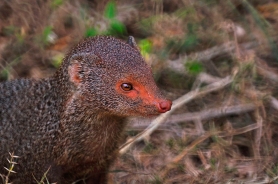 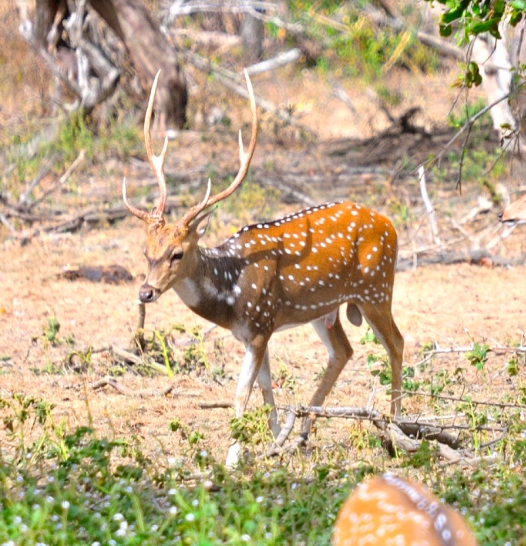 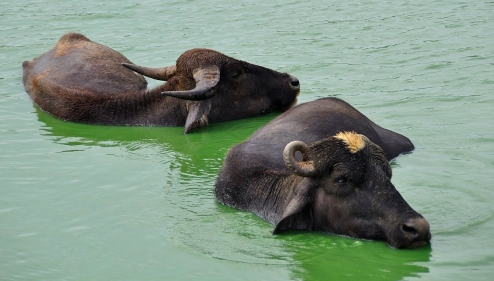 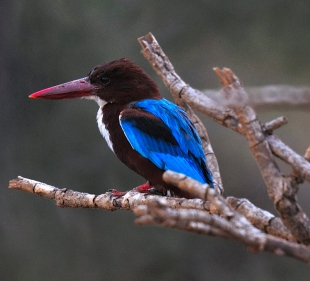 By late afternoon, we still had not seen a leopard. While Yala is one of the best places in the world to spot leopards, chances are still not good. In the past, when an animal was described as “elusive”, it usually meant I wouldn’t see it. I tried not to get my hopes up. We were told that one man had spent days in the park just hoping to get one photo of a leopard, and still had not succeeded. 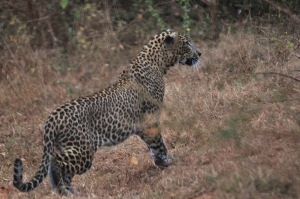 It was in the last 20 minutes of the trip when it happened — a young leopard ran across the road right in front of our Jeep. We held our breath and gazed at it in disbelief. My husband jumped up and caught the leopard on camera right before it disappeared back into the trees. It was the perfect end to a very long and wonderful day.

After Yala and Minneriya, we debated about whether to do one more safari. We couldn’t resist one last day in a park, though, and headed for Uda Walawe, not far from Yala. This was another elephant-focused park. But who can get tired of elephants? These were beautiful, and plentiful. Dozens were gathered around the lake, including a tusker in the distance and — my favorite — a tiny (for an elephant) three-week-old baby. Uda Walawe National Park was also relatively uncrowded compared to the other two parks we visited. 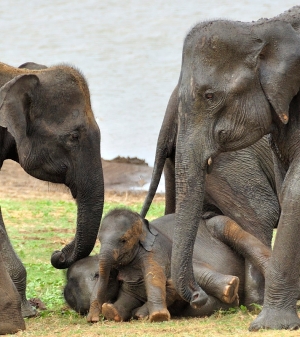 Not only were the parks and wildlife incredibly beautiful, but the trip was also very affordable. For example, an afternoon trip to Minneriya, including entrance fees, vehicle, and driver, totalled about $70 for two people for an afternoon trip, not including tips. A full-day trip to Yala was about twice that.

Park entrance fees were between $20-$40 per person, per day. Tourist fees are quite high in Sri Lanka compared to the cost of travel. (Hopefully that money goes to conservation!)

Park transportation with a driver who can also point out wildlife cost between $40-$70 a vehicle, depending on the park and whether it’s a half- or all-day safari. If you share with other travelers, you’ll cut your costs. We liked having a Jeep to ourselves, since we could move around in the back seats to get good photos.

Lodging was equally affordable. Basic but clean guest houses with hot showers, TV, wi-fi, and air conditioning ran between $40-$50 a night. Plenty of less expensive backpacker accommodations (and even a tented camp in Yala) were available as well. When we splurged on luxury hotels, it was still usually under $100 a night.

Our own driver for a trip around Sri Lanka, in a comfortable air-conditioned car, including gas, cost us about $50 a day. Trains and taxis are much less, though the trains are slow and sometimes crowded. Hiring a Jeep is required inside the parks, since the roads are rutted and rough.

I don’t know how our safaris compared to those in Kenya or Tanzania, having never been there, but I was thrilled by all the wildlife we saw and would definitely recommend a Sri Lankan safari adventure. Go to Uda Walawe or Minneriya for elephants, and to Yala for everything else!

Affordable, adventurous, great wildlife photography and birding opportunities? We’re in! Sri Lanka is now on our to-visit list! Thanks so much to Miranda for sharing her Sri Lankan safari adventure with us (and with you!). Enjoy your next travel adventure, whether it’s for a week or a weekend!