So you’re probably not the Cubs fan that I am. (Your spouse and your blood pressure probably thank you for that.) But Chicago is a fantastic city with much to offer to travelers, and whether or not you’re a baseball fan, the Wrigleyville area on Chicago’s north side is well worth a visit for those seeking some fun in the sun, nightlife, or just a taste of neighborhood life in America’s third-largest city.

Of course, for me, a springtime or summertime trip to Chicago wouldn’t be complete without a trip to Wrigley Field to catch a Cubs game (or two!). Nestled into the Lakeview neighborhood, the stadium — built in 1914 — isn’t surrounded by vast parking lots. Instead, it’s sandwiched between four Chicago streets — Clark, Addison, Sheffield, and Waveland — with a bus stop out front and a CTA “el” train station a half-block away that make getting there simple. Taxis and private drivers abound, and are easy to book via smartphone apps like Curb, and Lyft.

Outside the ballpark, photo opportunities abound. The legendary red and white Wrigley Field marquee at the corner of Clark & Addison is a must-stop for photographers from around the world, and Cubs fans don’t want to miss the statues of iconic Cubs figures such as broadcaster Harry Caray and Hall-of-Fame teammates Ernie Banks, Ron Santo, and Billy Williams that are scattered around the ballpark.

Inside the 41,160-seat park, the historic manually-operated green and white scoreboard looms over center field. Although the left field Jumbotron now dwarfs it, keep an eye open for its operators watching the game through the cutouts in the scoreboard. The playing field itself is a gem — green grass surrounded by ivy-covered brick walls topped with a home-run catching basket.

My favorite seat? Front row in the right field bleachers, where fans are 12 feet (3.7 m) above the playing field and the players are well within earshot. All bleacher tickets offer general admission seating, on a first come, first served basis, and — unlike in previous seasons — bleacher ticket holders can wander the entirety of the ballpark as long as they carry their ticket stub. Gates open two hours before game time, which gives fans time to watch batting practice. Not there on game day? No worries — the Cubs offer guided tours of Wrigley Field on select non-game days (and some game days, too!). 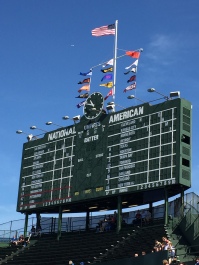 The view from right field

A variety of food and beverage options are available inside and outside the park. (My recommendation: a veggie Chicago dog from Decade Dogs behind section 123.) However, budget travelers can stretch their travel dollars by bringing their own food into the park, along with unopened plastic water bottles.

Whether you’re in Wrigleyville before a game, after a game, or on a non-game day, here are a few of the many Clark Street establishments that can wet your whistle and curb your hunger:

The Cubby Bear sits directly across from Wrigley’s marquee. Opened in 1953, today’s version is not your father’s Cubby Bear. It features live music on weekends and becomes a 20-something hotspot on game days, complete with live bands or DJs cranking the chest-thumping bass. Two bars on opposite walls sandwich enough bodies to make even the most lenient fire marshal nervous. Loud and fun if that’s your scene.

Murphy’s Bleachers — on the corner of Sheffield & Waveland — is another Wrigleyville mainstay. Don’t let its small storefront fool you — this bar goes on & on inside. Its location across the street from the bleachers exit guarantees a wall-to-wall post-game crowd. Unlike the Cubby Bear, Murphy’s focuses on beer, pub grub, and socializing instead of a driving beat. Rumor has it that you could find a few Cubs players enjoying a post-game beer here in the ’80s. While those days are long gone, Murphy’s still tops my list for a postgame cold one.

Goose Island Despite Chicago’s size, there weren’t many microbreweries in town until quite recently. Goose Island was Chicago’s first foray into the genre (1988), and although their beer has since been bought out by Anheuser-Busch, their craft beers and still-locally-owned brewpubs still fill a niche in Chitown. Their Wrigleyville establishment has a vibe that falls somewhere between an independent Portland pub and a Rock Bottom franchise. Either way, it offers table service and a (slightly) less-crowded alternative to Murphy’s and the Cubby Bear. [Note: as of December, 2015, Goose Island’s Wrigleyville location has closed for good. Keep an eye open for what’ll come next in that space!]

Dimo’s Pizza doesn’t serve beer, but by the time you’ve left one of the Wrigleyville bars, you probably need a slice of ‘za more than you need another beer. Its Wrigleyville location opened in 2008 and serves eclectic slices in addition to traditional pies. (Their top-seller? The Mac, with mac ‘n’ cheese atop a creme fraiche base.) Ordering consists of pointing to the slice(s) you want and deciding if you want The Dealio — a slice and a can of pop — for $5. 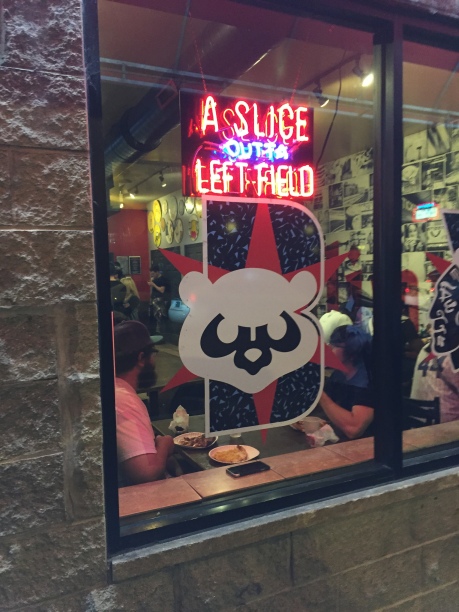 Slices out of left field, indeed 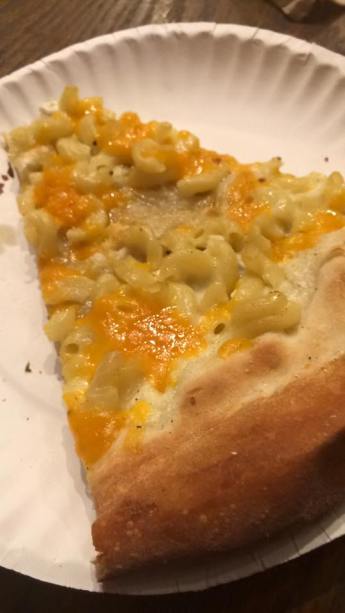 Those looking to eat on the cheap can do so at the Taco Bell on Addison or the McDonald’s on Clark, but a short walk west to Southport Avenue leaves the Wrigley crowd behind and drops you into one of Chicago’s great neighborhoods. You’ll mix with friendly Chicagoans at the historic Southport Lanes, with its hand-set bowling pins, billiard tables, and antique bar. The nearby Golden Apple Grill offers tasty diner food 24 hours a day, and, across the street, St. Alphonsus Church even closes off a block of Southport for a weekend-long Oktoberfest each fall.

Lodging is tight around Wrigley, with few hotels and really only one budget option — the Heart O’ Chicago Motel about 3 miles north of Wrigley on Clark. While I’ve stayed there before, I recently opted to stay at an Airbnb within walking distance of the park. Just north of Southport & Lincoln, the eclectic, one-bedroom unit occupied the daylight basement of a historic 1890s home and was clean, comfortable, spacious, well-located (about a five-minute drive or 20-minute walk to the ballpark), and had free on-street parking. 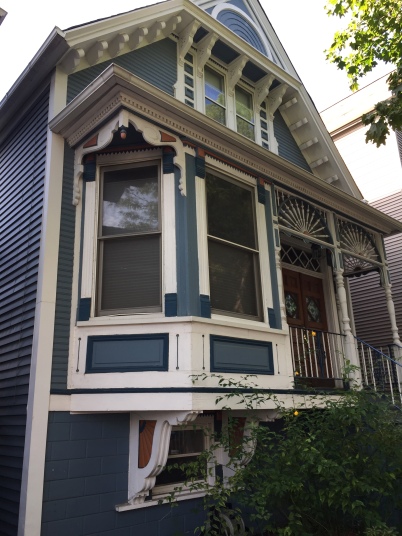 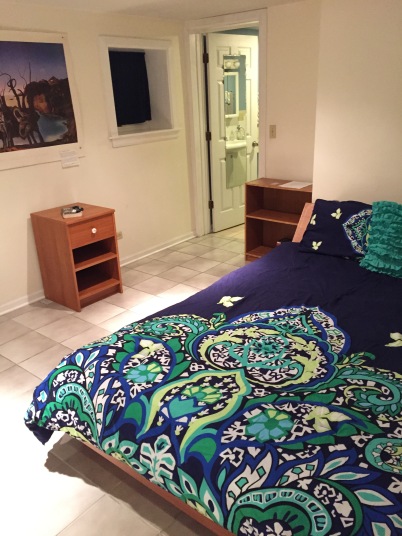 Have you spent some time in Wrigleyville? What’s your favorite pre-game or post-game hangout? Leave a note in the comments, and enjoy your next trip to Chicago, whether it’s for a week or a weekend! And … GO CUBS!

Disclosure: Our Airbnb host offered us a discount in exchange for featuring the property on our blog. However, all opinions are our own. A full review of our stay is available at Airbnb.com.