Shaking it up in Tikal, Guatemala 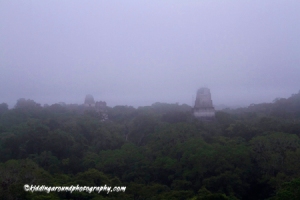 Awaiting the (non) sunrise at Tikal

In the summer of 2014, we sat 200 feet above the ground atop the ancient temple Templo IV in Tikal National Park, Guatemala, and listened to howler monkeys and exotic birds while we awaited the sunrise. There was no spectacular sunrise that morning — too foggy — but we did have a different kind of once-a-lifetime experience. At least we hope it was once-in-a-lifetime. That morning we felt an earthquake shake the whole temple! 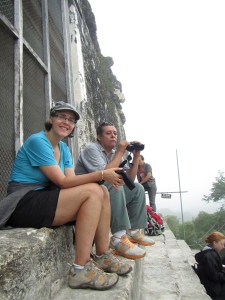 Sitting up on Templo IV at Tikal

We were there with several other tourists, all of whom had also gotten up around 4:00 AM. Most of them, like us, had probably felt few if any earthquakes before. So when the temple started to shake, most of us weren’t quite sure if we were still just groggy and imagined this was happening or if it was real. And if it was real, was it actually an earthquake? And if it was an earthquake was the whole temple going to crash down into rubble? I consoled myself with the idea that this temple had already stood for thousands of years, and it couldn’t have been the first earthquake to rumble there. Right?!

Afterward, our guide confirmed that it was, indeed, an earthquake, and said he’d never felt one that strong while on the temple. It turned out there was a serious earthquake in a far away area of Guatemala, one that caused a lot of damage, and it was strong enough that it was felt in most of this small country. Luckily for us, there was no damage at Tikal.

One of the many temples in Tikal National Park

Tikal is a beautifully preserved area of an ancient Maya civilization that lived in eastern Guatemala beginning around 900 BCE. This UNESCO World Heritage site showcases what was the greatest city in the Maya world at one time, with around 100,000 residents. Somewhere around the end of the 9th century, Tikal was abandoned, and no one really knows why.

After the city was abandoned, the jungle took over the huge temples and other buildings, and they were basically invisible until the mid 1800s when an archaeology expedition began to uncover them. Some of the structures were restored in the 1950s and 1960s, and we can now explore what was once an incredible ceremonial, cultural, and commercial center. 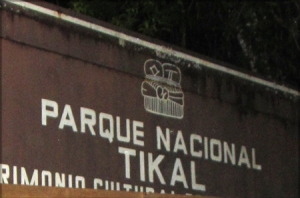 It’s pretty dark before 5 AM at Tikal!

You must have a guide if you are going to visit Tikal for sunrise (you do not need one to visit during daylight). The pathways are not lighted, so your guide is literally guiding the way, and we would never have been able to find our way on our own in the dark. Tip: We wished we had our headlamps! Our guide had a flashlight, but headlamps would have been better as he led us up the paths to the temple with the best spot to view the sunrise. The park has built a stairway up the back of the temple to help preserve the original structure. This is good for the temple and good for the thighs, as the original steps are extremely high and difficult climbing.

After our exciting non-sunrise, we wandered the rest of the grounds of the park, and saw many more temples and living areas. Having a guide was great while walking the rest of the park as well, because he had so much information about the people who had lived there that we would otherwise never have learned.

Our guide was also an excellent birder, which was great for us as bird-nerds. He recognized many birds by their call and would take us in search of them deep into the forest. He was also able to show us a rare pair of birds, Emerald Toucanets, that nest in the park because he knew where the nest was. Again, we would never have found this on our own.

We met our taxi back to town at the park entrance (taxi pick-up from our hotel and delivery back to our hotel was included in the guide’s fee) a little before noon, but since we’d been up since 3:30, that was practically a full day.

Fees for this excursion:

Cost for our trip to Tikal: $231. Memory of sitting on a temple during an earthquake: priceless!

Do you have a once-in-a-lifetime travel memory? Leave us a note in the comments, and enjoy your next travel adventure, whether it’s for a week or a weekend.

5 thoughts on “Shaking it up in Tikal, Guatemala”