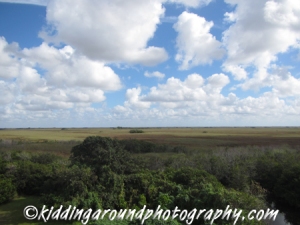 The Shark Valley area of Everglades National Park is the best place to see Rachel Carson’s famed “River of Grass.” It’s quite a fantastic sight, unlike anything we’ve seen elsewhere and definitely worth a stop if you’re in the park. We opted to do the very popular tram tour here. (This area can also be explored on foot or by bicycles which are available for rental – reservations recommended). The tour is run by a park concessionaire, not the park itself, and costs $23 per adult ($19 for seniors, $12.75 per child). It lasts about two hours and makes a circle tour of this area of the park with a knowledgeable guide narrating the trip. The tram makes stops for watching wildlife and at the famous observation tower. 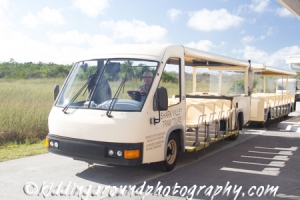 Our Shark Valley tram pulling up to load

The tram holds about 40 people, with three to a bench seat. The tram is open air, and since it’s Florida, that’s perfect. Getting a seat on the building side of the loading area allowed us to have the best viewing of the canal area toward the end of the trip, but there aren’t really any bad seats. The driver tries to swing the tram a bit to allow everyone to see both sides. 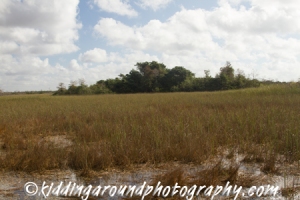 This area is a valley dotted with hammocks of land that are just a bit higher than the main valley floor. And we do mean just a bit: from a few inches to a few feet! But just a slight change in elevation really allows for much more diversity in the ecosystem. It’s pretty stunning. Hardwood trees that cannot grow at the valley floor will grow at just a bit of elevation, because their root systems can be supported. It gives the effect of little islands of trees throughout the grasslands.

There are lots of birds in this valley, some solo, some in small flocks, and also lots of gators. They’re tricky to see sometimes, as try hide themselves away, but we did see a fair few. I wonder how many we passed that we didn’t see! In one spot that the guides knew, we stopped and looked down into a pool where a mama gator and several little babies were nesting. They were so tiny, it was hard to imagine they’d be big old gators someday. At least the ones that don’t get eaten in the meantime will be. 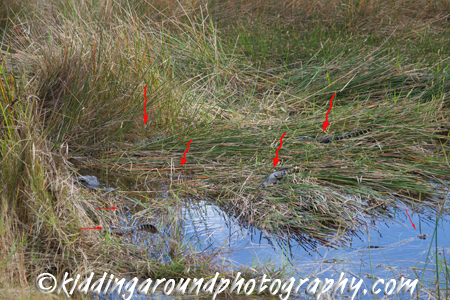 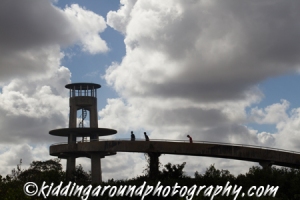 Down at the end of the loop, there is a tall observation tower that’s been built to give visitors a 360 degree view of the river of grass. If you’ve seen photos of Everglades NP, you’ve likely seen this iconic white tower. It’s built right over a river, and because Florida’s so flat, we could literally see for miles. It’s a fantastic landscape. Blue skies would have made it just a little bit better, but it was still beautiful.

Once the tram left the tower, it traveled along a canal that is full of birds, which are largely unfazed by the people along the trail or by the tram for that matter. There were lots and lots of gators here as well; they’d traveled to where the water is. When the tram got near the visitor center again, the road was pretty crowded. Pedestrians and bicyclists are supposed to yield to the tram, but it didn’t always work out. 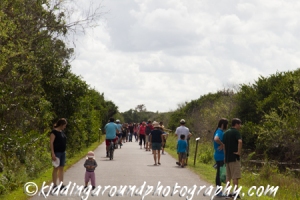 Is this a national park or Disney World???

Our tram left around 9:30 and returned around 11:30, just in time for a PB&J picnic in the parking lot! We walked along the canal for a while after lunch even thought it was pretty crowded because we wanted to see the birds up close, and by the time we left, we were really hot and a little irritated by some of the people who were having their kids get closer and closer to alligators. Seriously, people, they’re WILD animals with large teeth. Don’t go off the path onto their territory. You’re plenty close right on the path. 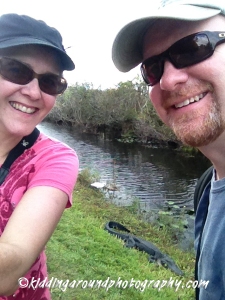 I was glad we’d had a chance to see so much of the area by taking the tram tour. It is a little bit spendy, and it was a little hectic getting tickets (order online more than three days in advance!), but it was beautiful, informative, relaxing and no one was putting themselves or others in danger by getting close to the alligators!

Have a favorite adventure that’s worth the cost? Share it in the comments. Enjoy your week or your weekend, but please stay on the path! 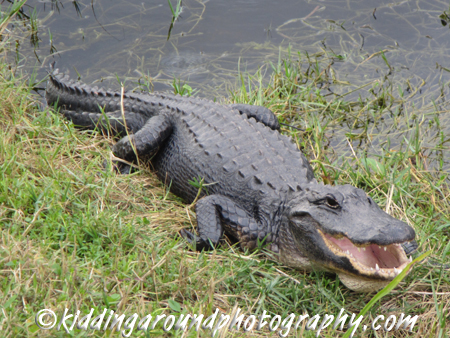 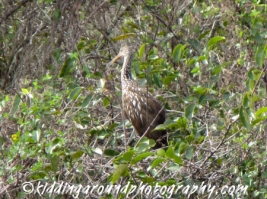