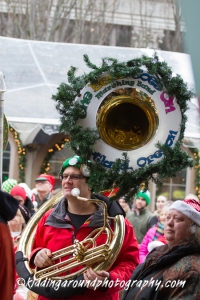 All decked out for Tuba Christmas!

There are many fun holiday events around Portland, but perhaps one of the most fun is Tuba Christmas. Never heard of Tuba Christmas? Well, neither had we until our music teacher friend Ann introduced us to the whole thing. She told me about it years ago, but we finally got ourselves organized enough to go for the first time last year. It was a blast! Portland’s 2014 Tuba Christmas will be held on Saturday, December 13 at Pioneer Courthouse Square.  (Update:  the 2016 event was on Saturday, December 10th.)

Turns out these events are held all over the world, and they’ve been going on for over 40 years. Groups of tuba and euphonium players get together to perform holiday songs at Christmastime. Don’t know the difference between a tuba and euphonium? Don’t worry, unless you’re looking to play in the concert, you’ll be fine!

If you’re a musician, you have to register at Portland State University at 9 a.m. for a rehearsal that starts at 10 a.m. There is only one rehearsal, which makes this event that much more amazing. This is just a group of many random players who come together on one day to play the same music. It’s pretty remarkable that they sound so good, and they really do!

If you’re not a tuba player and are simply wanting to enjoy the show, the performance begins at 1:30 p.m. at Pioneer Courthouse Square. You should arrive early, though, if you want to have any chance of sitting down. We arrived about a half an hour early last year, and it was not nearly early enough to find a place to sit. We stood on the edges, which was fine, but it was pretty crowded around us and we did not have a great view of the tuba players.

Portland’s Pioneer Courthouse Square is affectionately referred to as “Portland’s living room,” and it also houses the city’s official Christmas tree, which is lit during a ceremony on the day after Thanksgiving each year. The 75-foot (23 m) tree looms over the Tuba Christmas event, which is held outdoors. Both the tree lighting and Tuba Christmas go on rain or shine, so be prepared! 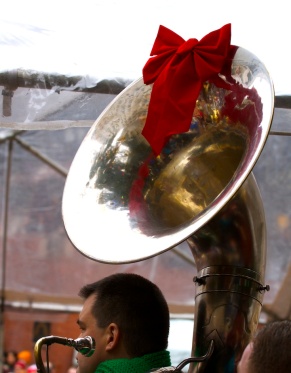 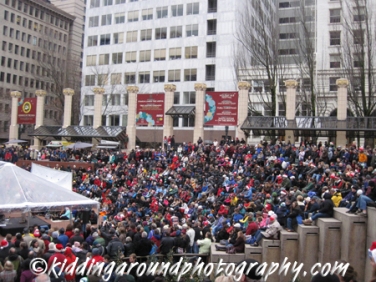 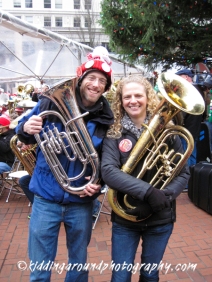 I think he’s been doing this a while!