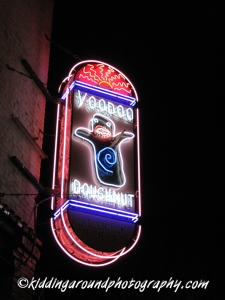 Well, perhaps we don’t owe it all to the little chocolate doughnuts like John Belushi, but some of Portland’s foodie fame has certainly been the result of doughnuts.

Voodoo Doughnuts is a top tourist attraction in Portland. Is it worth the hype? I, who am not often a doughnut lover, think so. For one thing, a visit to Voodoo shows off our Keep Portland Weird vibe. I mean, waiting in line for a little doughnut man that’s been stabbed with a pretzel or a doughnut in the shape of male genitalia is a little weird.

However, the doughnuts are also good! They have all the usual suspects: cake donuts, buttermilk, plain glazed, jelly filled, creme filled, fruit fritters. They have the fancy flavors like Tang powder, cereal topped or candy-coated. And of course they have the more famous flavors like the famous bacon maple bar and the actual voodoo doll doughnut. My main pet peeve with other doughnuts is that they often leave your mouth feeling like it’s coated with shortening. Not so with the Voodoo.  All of the doughnuts are cleverly named, too (the Marshall Mathers, for instance — know what that one’s topped with?). If you’re coming to Portland, Voodoo’s worth a stop. Tip: the store on the east side of the river tends to have a shorter line. 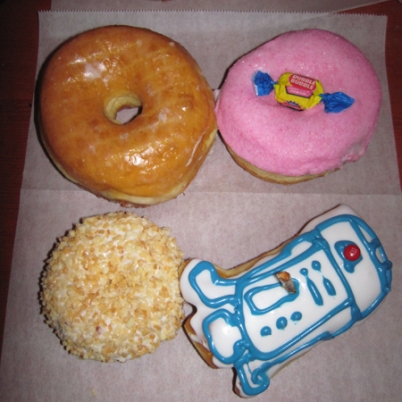 A selection of Voodoo goodness 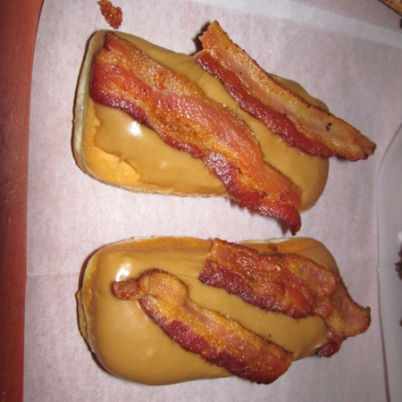 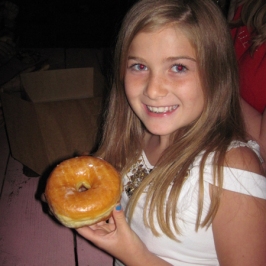 They also have plain old doughnuts!

The Texas doughnut – the thing’s as big as his head!

The magic is in the hole!

Lest you think we’re a one horse town out here in Portland, however, let me suggest a couple of other delish doughnut options for you.

Pip’s Original Doughnuts is up on the hip and happening NE Fremont Street, a nice neighborhood to walk off the doughnuts once you’ve been in. They make the doughnuts fresh there, so they’re always hot and oh-so tasty. There are many great things about Pip’s, but one of my favorites is that their doughnuts are actually little mini doughnuts that you can buy in a batch of 4, 6, 8 or 12. It just feels less sinful and it’s a great way to share. If you wanna give any of them up, that is. Which you might not. Listen to this fall line-up of flavors: Raw Honey & Sea Salt, Apple Cider Glaze, Cinnamon/Sugar, Nutella & Sea Salt, The Dirty Wu. So much deliciousness.

Are you drooling yet? Because I haven’t even mentioned their five house-made flavors of chai yet. I had an iced “The King and I” the last time I was there, and it was the perfect accompaniment to my itty bitty doughnut topped with peach sauce and vanilla ice cream — yes, they serve them like that, too! It’s so good these places are not near our house.

Doughnuts topped with ice cream and some delicious chai 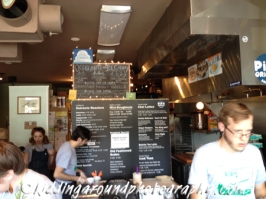 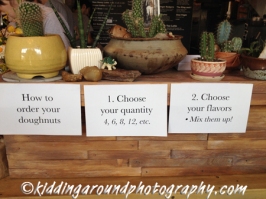 Spot number three is getting dangerously close to home, however. Blue Star Doughnuts now has an eastside location (in addition to a westside and NoPo location) which is totally within walking distance of my house. I think I will require myself to walk there if I’m going to eat one. Or more than one…Blue Star doughnuts are definitely doughnuts for grown-ups.

They, too, make their doughnuts fresh every day and have creative flavors. Their flavors, which change every day, tend toward the more gourmet: pistachio cake with raspberry hibiscus, cointreau creme brulee, dulce de leche cake, pear plum compote. They also have a traditional buttermilk which was reportedly quite excellent, although no one saved me even a bite! Their Meyer lemon-key lime filled doughnut was one of the most delicious doughnuts I’ve ever had. The texture of it was incredible and it was a perfect tart to sweet ratio. They still haven’t figured out how to keep that powdered sugar from giving you away as a doughnut eater, though. Maybe that’s a doughnut marketing technique! 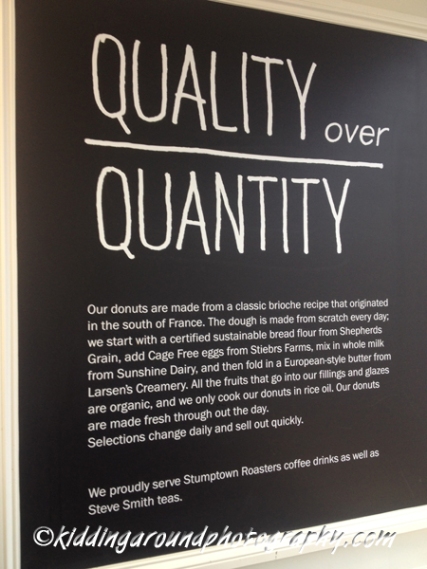 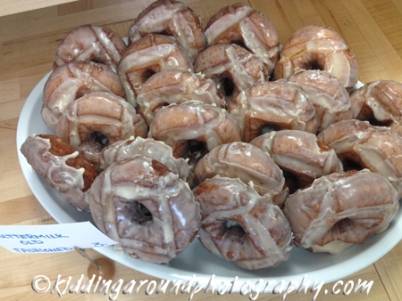 It was hard work being your taste tester for this post, but you were worth it. It was fun to explore each of these doughnut spots and the unique niches they’ve created here in Portlandia. Go out for your own taste test and let us know which one you liked best! Hope you have a sweet week or weekend!

6 thoughts on ““I’ve downed a lot of donuts!” Doughnut Taste Testing in Portland”