On a recent trip, we had a one-night layover in Fort Lauderdale, Florida, and were looking for a place to eat near our hotel. The hotel staff recommended a restaurant within walking distance, but it was a bit out of our budget. So, we turned to Yelp. Yelp has a great feature that allows you to search for nearby restaurants, which is handy when you’re in an unfamiliar city.

Yelp lists how far an establishment is from your location, offers customer-written reviews, and indicates price range via a $ to $$$$ system. Once we’ve narrowed down our choices, we’re sure to do a double-check on TripAdvisor. We’ve found that we tend to agree with the consensus of reviewers, so we ignore the outliers when making restaurant and lodging decisions.

For our dinner in Fort Lauderdale, Yelp had several suggestions. The one that sounded the best to us was Gilbert’s 17th Street Grill. After taking a peek at the menu via Yelp and seeing fantastic reviews on TripAdvisor, we made the short drive to the Harbor Shops area to grab a bite.

Not the owner, just a happy customer

As we walked up to the restaurant, a gentleman standing outside asked us if we had ever eaten there before. When we said no, he told us to just go right in and grab a menu inside the door. “My wife will take care of you when you get inside,” he said.

We realized he must be the owner, so we stopped to chat with him. Sure enough, it was Mr. Gilbert himself! He told us how he had owned a restaurant in New York for a long time, and had done high-end catering. It was actually a classic American story: he started in the restaurant as a busboy, then became a waiter, and eventually bought the place! Anyway, he and his wife moved to Florida a few years back, and this is his second restaurant venture there.

Gilbert’s is famous for its burgers, voted best in South Florida a few years back and still consistently voted among the best in the area! Now, you might not think a burger place would appeal to two vegetarians. But they have plenty of veggie options, including several of the daily special items listed on a board inside the front door. 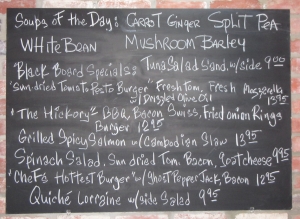 Not in the mood for a burger? No worries!

Our dinner started off with a huge green salad with a delicious raspberry walnut vinaigrette dressing. The salad was definitely big enough for both of us to share. Then we ordered a portobello mushroom sandwich with fries and a grilled mahi-mahi sandwich with sweet potato fries. We split them down the middle and each got half of everything — which was way more than either of us needed, but somehow we managed to polish it all off! 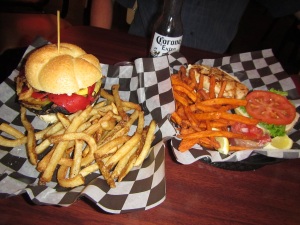 The portobello mushroom sandwich had a huge mushroom piled high with roasted red peppers and squash. And it was topped with those crispy little onion thingies. So YUM! Seriously one of the best portobello sandwiches I’ve ever had (and I have had a lot of them!). The fish sandwich was also delicious — a thick piece of mahi-mahi beautifully grilled and served on a soft kaiser roll. To cap off our meal we had a true South Florida treat, Mrs. Gilbert’s homemade Key lime pie. The tangy sweetness sent our tastebuds into overdrive!

The restaurant has a relaxed, casual atmosphere, perfect for groups or families. The servers are very friendly and helpful, and the Gilberts themselves were both checking in and chatting with customers — mostly locals, a few tourists — the whole time we were there. They are certainly people who are not only very good at what they do but who obviously love doing it as well. We’ll be back the next time we’re in Lauderdale!

Having been to Gilbert’s, it’s easy to see why it was rated so highly. It reinforced our belief that by checking the ratings on sites like Yelp and TripAdvisor, you’re likely to find some great little spots — even in a town you’ve never been to before!

Have you had a great Yelp experience? Or do you have another favorite review site? Leave us a note in the comments, and enjoy your week or your weekend!

A South Florida souvenir for the tastebuds!