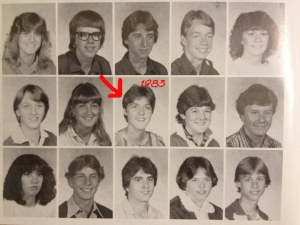 My yearbook photo 1983. I tried to find a photo of myself in Costa Rica from that trip, but I couldn’t get my hands on one.

When I was 17, my parents sent me off for two months to study in Costa Rica.  It was an incredible opportunity for me, and I’m so very grateful that they were brave enough to do it.  I learned to speak Spanish by going to local schools and living with incredibly warm and hospitable families who spoke mostly Spanish to me.  This trip was where I was well and truly bitten by both the travel bug and the photography bug, and I’ve loved both ever since!  A few years ago, I decided that Jeff had to experience this beautiful country as well, so we flew south for the summer.

We had lots of people recommend that we go ziplining in Costa Rica, which since it wasn’t actually a thing in 1983, I hadn’t done there previously.  We researched the places to do that, and we decided to go to Monteverde.  Bonus: Monteverde is also a big bird nerd location!  To get there from the San José area, we traveled via shuttle bus (minibuses or vans), via a company called Interbus.  (On a later trip we rented a car, but we’d recommend the shuttle buses as a pretty economical, and decidedly less stress inducing, option.  Costa Rican roads can be interesting, not to mention their lack of signage.)  Interbus travels to pretty much all the main tourism destinations.  The minibus/vans are pretty comfortable. They are sometimes on what our Costa Rican friends jokingly call “Tico Time” — just a little late, but not always.  It’s part of the Latin American experience.

We stayed in a small hotel run by a German fellow, actually, called the Sunset Hotel.  There are less than ten rooms, the rates are reasonable, and the grounds and views are gorgeous.  The thing I loved most about this hotel was sitting out on our little porch and watching the clouds actually envelop the whole place.  Monteverde is in the cloud forest, and you really are IN the clouds up there.  It’s a bit otherworldly at some times.  It’s also chilly, so pack a jacket!

The owner arranged for our ziplining tour, and instead of taking a commission from the company, he passed that amount onto us as savings. That was pretty nice!  A bus came to pick us up early in the morning, and off we went to swing through the jungle.  Selvatura has 13 ziplines of varying lengths — some are short, quick little passes, and some are loooong rides with nothing but the whiz of the wire and the sound of wind whipping in your ears. Sometimes people see monkeys, but either there were no monkeys out when we were there, we missed them, or our eyes were squeezed too tightly shut to see them.

Heading up to our zipline canopy tour, Monteverde, Costa Rica

We were pretty nervous at first.  It’s not every day you’re required to wear a helmet and are being carabinered into safety harnesses.  I think a little fear is healthy in such a situation.  But actually, once we had gone on the first few lines, it wasn’t scary at all — even Jeff who’s occasionally got a healthy fear of heights got pretty comfortable after a few lines.  And once we were comfortable and could actually look around while we flew over the canopy, it was awesome.  You just don’t have that viewpoint or the feeling that you’re flying very often.

At the very end of the adrenaline rush zipline tour, there’s an option to do a Tarzan swing.  Basically, you’re snapped onto a giant rope and jump off a high platform and swing out over a ravine.  Jeff opted to do this craziness!  You can watch it here.  I think he was pretty sure that shout out he gave would be his last, but he lived to tell the tale.

It didn’t rain during our zipline tour, which was good, but during the treetop walkways tour, the skies opened up and we were soaked through to the skin by the end of the 2 mile trail over hanging bridges.  The rain just added to the jungle-y feeling, though, so we didn’t mind.  The heated, covered butterfly garden was a nice place to warm up. There were all kinds of species of butterflies in every stage from caterpillar to chrysalis to flying around.  My favorite butterfly in all of Costa Rica is the Blue Morpho.  They’re so beautiful and they’re gigantic!  The top side of their wings is a bright, bright blue.  I remember being out in a canoe one day and seeing a blue morpho flying around and feeling like I was seeing a Disney sprite, like Tinkerbell or something.  Magical. 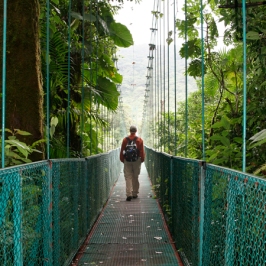 We continued our exploration of Selvatura in their Hummingbird Garden, where as you can imagine, the bird-nerds were on HIGH alert.  It was crazy – there’s no other way to describe it.  They have lots of hummingbird feeders, and clearly the word is out to the bird community, because it’s like a beehive out there.  Birds were going every which direction, buzzing one another, chasing each other around, grabbing a quick sip when they could. There’s a short video here to give you a better visual of the whole hummingbird circus.

The cost to spend the day at Selvatura is around $100 (just ziplining is less).  While it’s not exactly a budget option, it is a whole day’s worth of entertainment, and it’s quite a unique experience.  We spent a fantastic day there.  We would do it again in a heartbeat and highly recommend it.  If you’ve ziplined here or elsewhere in Costa Rica, or if you want to, please chime in on the comments!  Keep your head in the clouds and enjoy your week or your weekend!