Yes, you really do need to stop at Mt. Rushmore! 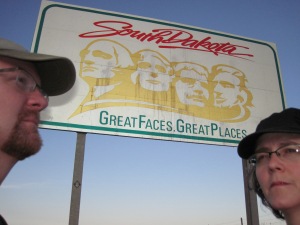 Do we really need to stop? Haven’t we already seen Mt. Rushmore on the SD license plate?

Mt. Rushmore is one of those places that you kind of wonder if you need to see in person because really, haven’t you sort of seen it in pictures already?  But we’d like to encourage you to re-think that idea on this one.  Yes, it will look just like the pictures, but the pictures can’t capture the scope of this project, and you certainly don’t get the historical perspective from pictures.  If you’ll be anywhere near Keystone, South Dakota, this really is a must see stop.

It is free to visit Mt. Rushmore, but there is an $11 mandatory parking fee/car (passes do not cover this fee), so it’s actually only kind of free.  The parking pass is good for one year, though, so if you want to go back a few times while you’re in the area, you won’t have to pay again.  And you can probably get most of the states you need in the license plate game in the parking structure!  Not that we got any of the four we still needed there…  You can pay a small additional fee to get a narrated audio tour of the monument.  We did not do that because we figured we could learn most of what was on the audio tour from the signage and movie, but some people prefer listening over reading, so it’s a nice option.

One flag for every US state

When you enter the memorial, with the many, many other visitors who are entering at all times — you walk down a row with the flags of all the states flanking both sides of the walkway.  It’s fun to find your state’s flag, and it was interesting that almost everyone from the US seemed to do that.  Apparently we have quite a sense of state pride in this country!  The flagway opens to a huge viewing platform that overlooks the amphitheater and gives a great view of all four presidential heads:  George Washington, Thomas Jefferson, Teddy Roosevelt, and Abraham Lincoln.  The crowd thins out closer to the sculpture, and although there are lots of people there, it really doesn’t feel crowded.

In addition to the viewing platform, there are several other places around the monument to explore — places you should definitely include in your visit.  There’s a small museum area with informational panels, old photos, a ranger desk, and an auditorium with a movie.  The movie about the memorial, Mount Rushmore: The Shrine, is excellent.  It gives a very good history of how the project came to be, tells a lot about the sculptor, Gutzon Borglum, and explains how the work itself was done.  There are historical photos in the film, and some great archival video footage.  The film lasts 14 minutes and is well worth the time.  It’s also air conditioned in the theater, a nice bonus on a South Dakota summer day!

Borglum’s Studio is just a short walk down the hill, and it has some of his models and shows how the plumb line apparatus worked.  That was quite interesting.  It’s hard to imagine taking this vision Borglum had and then actually creating it while hanging in the air using sticks of dynamite and jackhammers, basically.  The plumb lines were a big key to their success.  There are also some of his early renditions of his vision, and it’s interesting to see the different layouts he considered and what he had planned compared to what actually got finished.

From the studio, there is a short walkway called the Presidential Trail which takes you much closer to the monument and gives a different perspective.  It’s not long, but it does have a lot of stairs.  Thank goodness I broke my foot after we went there or I probably couldn’t have done that trail.  We were really glad we took the time to go over to this side and get a different view of the monument.  It’s such a stunning achievement, and just getting a little bit closer does make a difference in what you can see.

Closer view from the Presidential Trail

The best light on the faces is in the morning.  By afternoon, there are shadows on the presidents, especially on Teddy Roosevelt’s face, since he’s tucked in back a little bit.  We planned to go up for sunrise the second morning we were there because I knew the light would be gorgeous, but Mother Nature had a different idea.  There was a crazy thunderstorm, so we waited it out and went up a little later.  It was still cloudy and gray when we arrived, but we could see some tiny patches of blue poking through, and after a little while there were big patches of blue, and finally it was perfectly clear behind the mountain.  It’s interesting to see how different the monument is with different lighting.  I actually liked it best when there were some clouds with the blue sky behind them and bright sun on their faces.

My favorite view – sunny and blue with just a few clouds. 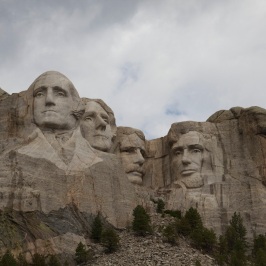 There is also a nighttime ceremony at Mt. Rushmore that is supposed to be quite patriotic and moving.  It takes place in the amphitheater and includes a film, music, a recognition of veterans, and the lighting of the sculpture.  Since we were planning to get up at sunrise, we opted not to go to the nighttime ceremony, but most of the reviews we read were very favorable.

Traveling with kids?  There is a Junior Ranger program here that many children were participating in.  Kids of different ages must complete different numbers of pages in the activity booklet.  Kids who finish get a Mt. Rushmore Junior Ranger badge!  There is also a Youth Exploration area with special activities and hands-on exhibits for kids. 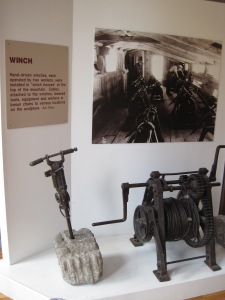 Some of the tools they used to make the monument. Most of the “carving” was actually done with dynamite!

It really is awe-inspiring to think about how these enormous carvings were made way back in the 1930s, and we definitely recommend stopping at this amazing monument.  Have you been to Mt. Rushmore?  What did you think of it?  Leave us a note in the comments, and enjoy your week or your weekend!

8 thoughts on “Yes, you really do need to stop at Mt. Rushmore!”