Portland, Oregon, is our hometown, and we love it here. Yes, it rains a lot, but that keeps it beautifully green, gives us snow to play in on our mountain, and provides us with some of the best drinking water in the country via the Bull Run watershed. Our climate is quite temperate, with lows rarely getting below freezing, highs rarely getting above 90°F, and humidity generally non-existent. And while the rain isn’t the greatest, it’s easier to shovel than snow, and we think that we have the best summer weather anywhere in the US. Travel & Leisure agrees.

If you’re coming to Portland, there are lots of things to do! Here, we’ll be suggesting just a few of our favorites, and it was really hard to narrow them down, believe me!

Portland’s food scene has all kinds of possibilities. It’s an especially friendly place for vegetarians and people who like to eat organic, locally sourced meals. Not to be missed is a meal at some of the many Portland food carts. There are over 500 food carts in town, organized into several pods across different areas of the city. Some of our favorites are the Grilled Cheese Grill and Potato Champion (try the PB&J fries!).

Portland can also class it up, too. Screen Door has amazing southern food (the praline bacon is out of this world). Portobello has a reputation as being one of the most gourmet vegan restaurants to be found. Portland City Grill provides you with an incredible view of the city while you eat, and, in inimitable PDX style, Russell Street BBQ caters to carnivores and vegetarians alike!

Drinks? We’ve got ’em. Portland is the country’s microbrew capital, and local breweries abound. They’re nearly as prevalent as our coffee shops! Cocktails on the rooftop deck at Departure, on the 15th floor of The Nines hotel is where you’ll want to go for a classy happy hour with the beautiful people. Our favorite happy hour spot is Gold Dust Meridian on Hawthorne. Definite hipster vibe going here, with generous drinks and delicious food. 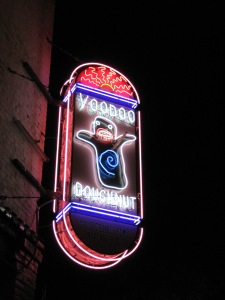 Voodoo Doughnuts – The magic is in the hole!

Want some great dessert? Salt and Straw serves small batch organic ice cream in some of the craziest flavors that you’ve ever heard of (one of their current flavors is brown ale and bacon!) is divine. The line is long but so worth the wait. Pix Patisserie is open late and everything is almost too beautiful to eat. Allow an extra fifteen minutes at Papa Haydn’s just to drool over the dessert case. And of course we have the famous and fabulous Voodoo Doughnuts.

1.  Powells City of Books. Best bookstore ever. It takes up an entire city block. You need a map to find your way around inside. Seriously, take the map. And they also have a great Portland Walking Tour map they give out for free!

Saw this guy at the waterfront playing the Star Wars theme on the bagpipes for the May the 4th be with You celebration. Portlandia lives!

2.  Tom McCall Waterfront Park. The gem in a “40-Mile Loop” system of trails that circles much of the Portland area, this 36 acre park sits along the Willamette River on the west side of downtown Portland. It’s about a 5K loop to go over the Hawthorne Bridge, down the Eastbank Esplanade (with great views of the downtown skyline), then over the Steel Bridge and back up the parkway. It’s a lovely walk (or bike ride) and you’ll really get a feel for how active Portlanders are (one of the reasons we were recently voted America’s 4th healthiest city!). And the people-watching will give you a clue as to why Keep Portland Weird is an unofficial city mottos. Festivals routinely fill the park during summer.

4.  Portland Saturday Market. This is a fabulous arts and crafts market with very high quality, local vendors that is open on Saturdays and Sundays from March until Christmas. And of course there is also great food!

5.  International Rose Test Garden. It’s kind of a weird name, but they really do test new varieties of roses here. There’s a self guided tour flyer with more information. They have 8,000 rose bushes, and if you can see (and smell!) them all blooming, it is glorious! It’s also a great spot to look over the city, and on a clear day you can see Mt. Hood.

People with children may want to switch out Powell’s with the Oregon Zoo, the Oregon Museum of Science and Industry (locally known as OMSI), or the Children’s Museum.

Want to day trip from Portland? Drive east into the Columbia River Gorge less than an hour and visit Multnomah Falls and Crown Point on the Historic Columbia River Highway. There’s a great, easy hike you can take to Elowah Falls out that way as well. You might also choose to make this a longer jaunt and do the full Mt. Hood scenic loop.

If you’d rather head west to the ocean, you can get there in about an hour and a half or so. If you head out on Hwy 99 toward the coast, you’ll also pass through some of Oregon’s Willamette Valley vineyards where you can stop and do wine tastings. Driving on 101 can be slow, so make sure you take the most direct route for the town you’re planning to go to. Once we mistakenly headed out on the wrong highway and ended up with a two hour drive down the coast to our actual destination. The drive was pretty, but I would have rather been out on the beach instead of in the car looking at it! 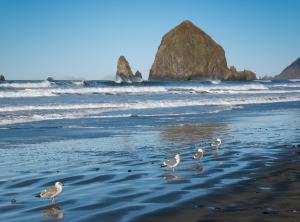 Portlanders and people who’ve visited, help us out here! Do you have a favorite Portland tourist spot that’s not on our list?  Leave us a note in the comments. Coming for a visit and want more ideas? Let us know; we’re happy to share more favorite spots in our city.

Enjoy your next visit to Portland, whether it’s for a week or a weekend!

8 thoughts on “Visiting Portland? Our Top Five Sights (and More)!”