Liebster Award – 11 Random Facts About Us

We were recently nominated for a Liebster Award by the Globetrotting Couple and by Girl About the Globe!  Unfamiliar with Liebster Awards?  They’re a fun way for bloggers to spread the word about other blogs.  Reminiscent of the postcard chain that Jeff got in on as a 4th grader, this requires a bit more writing and takes advantage of word-of-mouth marketing.

Here are the rules for the Liebster Award:

Since this is a travel blog, we’ve decided to put a travel twist on our answers to the 11 questions we received from the Globetrotting Couple, Elena & Wayne.

What is your favourite food?
We’ve had lots of amazing food experiences in our travels.  Three of the recipes we’ve brought home to make again are raclette (a potato, cheese, & pickles dish we first ate outdoors in Gimmelwald, Switzerland), dukkah (a nut & seed mix used, with olive oil, as a delicious bread dip we first ate at the home of friends in Perth, Australia), and Lime in da Coconut cocktails we first enjoyed at the Beach Bar in St. John (the original recipe — our favorite — called for sour mix instead of Sprite).  Bread, dukkah, and raclette washed down with a Lime in da Coconut?  Sounds like a great three-course meal to us!

What is the funniest thing you have ever seen?
The looks on our travelling companions’ faces when we showed them a photo we’d snapped of a rhino while on a wildlife safari in Tanzania.  (Okay, two rhinos … mating … but we digress …)  Our vehicle (the third of three) broke down, getting us back to camp much later than the others.  We’d all seen lots of amazing wildlife, but rhinos had eluded us.  One of the young women in our vehicle had a beautiful postcard of a rhino silhouetted at sunset … so to explain our delay to the others, we snapped a digital photo of the rhinos on the postcard and passed the camera around at dinner as explanation of our delay!  We fessed up a few minutes later, but the dinner conversation was hilarious!

What is your favourite word?
Vacation!

What is the most expensive thing you have ever bought?
Travel-wise, our trip to Africa was probably the most expensive trip we’ve taken.  Luckily, we’d saved enough frequent flyer miles to pay for most of our airfare, but some inter-African flights, train tickets, both a cultural and a wildlife safari, a stopover in Germany & Austria, and a side trip to Zanzibar added up.

We saved up by cutting our monthly spending for the year leading up to the trip — limiting restaurant meals, nights out, clothing and other purchases — and having a set amount of each paycheck automatically deposited into a savings account earmarked for the trip.  Well worth every penny!

What’s the #1 most played song on your iPod?
“Lime in da Coconut” by Harry Nilsson or some steel drum music takes us back to the Caribbean every time!

If you had to change your first name, what would you change it to?
Hmm. That seems like a better question for our parents!

If you were reincarnated as an animal, what would it be?
One that misses its opposable thumbs.

If you could witness any event past, present or future, what would it be?
The aurora borealis.  One of these years we will get up north to witness it!

If you could change one thing about yourself what would you change?
We would work less and travel more!

What has been proudest moment of your life?
We are proud that we’ve set goals — both financial and travel — and have achieved some and are on a path toward achieving others.  One goal we’re on track to achieve is to visit all 59 US National Parks. 38 down, 21 to go, with 4 more on tap for this summer.

Where do you see yourself in 5 years?
Hopefully on a beach with our toes in the sand and piña coladas in our hands! 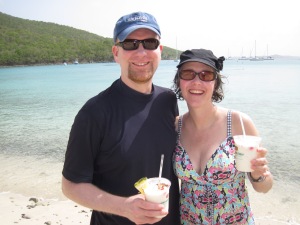 Piña coladas on the beach!

Girl About the Globe’s questions were travel-focused already!

Where was your first holiday?
The first trip we took together was a camping trip to Mt. Rainier National Park with some friends who were visiting from Köln, Germany.  An exchange student who’d stayed with Erin’s family during high school and her boyfriend, they were touring North America and were enjoying the beautiful outdoors during the summer of 1988.  Four years later, we visited them in Köln.  On our most recent European trip, we stayed with them — and their three kids — outside München!  Not only did that trip forge a friendship, but it just might have been where we were first bitten by the travel bug!  Either that or the senior citizen bus tour we took to Reno a few months later…

Backpack or wheely suitcase?
For years we were backpack-only travelers.  We’re still carry-on only travelers (okay, 90% of the time), but Erin now has a carry-on sized roller cart that gets used on flights where we’ll have a rental car at the other end.

Two-in-one haircare or separate shampoo and conditioner?
Jeff’s conditioner-phobic (and apparently somewhat hair phobic if you’ve seen him without a hat!), and Erin’s addicted to lotions of all sorts.  We’ll bet you can answer that one for us!

Africa or Asia?  Why?
Asia’s on our to-visit list, but we’ve been to Africa and loved it.  Of course, they’re both vast and diverse continents with so much to see.  We’ve only been to three African countries, so we’ll reserve judgment for now. 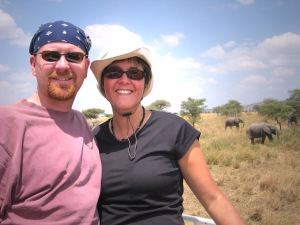 On safari in Tanzania

What is your favourite travel film?
Great question.  I think Erin would say The Sound of Music with the scenery and history it touches upon (not to mention that we took a Sound of Music tour — yes, very touristy, but very fun — near Salzburg, Austria on our first trip to Europe).

Harem pants or board shorts?
You mean Hammer pants, right?  😉  Jeff’s favorite pair of travel pants EVER were a colorful early-90s pair of lightweight cotton, elastic waist pants that were his go-to and well-traveled pair:  those pants saw Europe, US Virgin Islands, New York City, and much more.  It was a sad day when they finally (and quite literally) wore out.  He’s never found their equal.  Any suggestions?

Guidebooks or get lost?
Guidebooks!  Travel guru Rick Steves points out that they’re a $20 investment in a $2000 trip (adjust amounts as necessary!), and we agree.  We like knowing what there is TO see before we go so that we can make informed choices about how we spend our valuable vacation time.

However, once on vacation, we are flexible, too.  Some of our best travel moments have happened after stumbling — quite accidentally — across local festivals and concerts or simply asking the locals for off-the-beaten-path travel tips!

Mountain or beach?
We’ll take both, gladly.  We love mountain vistas and the peace and solitude they offer, especially in mountainous national parks.

But, the fact that we’ve visited Virgin Islands National Park on St. John nine times speaks for itself.  We love to snorkel, we love the sound of the ocean, and beaches offer their own version of peace (and, depending on the beach, solitude). 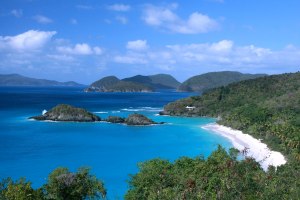 Looking at those photos, it’s pretty hard to choose, wouldn’t you say?

Travel buddy pet-hate?
Erin hates red-eye and early morning flights.  Her point is a good one:  waking up at 3 or 4 a.m. to catch a flight (or being on one at that hour) ensures a lousy night’s sleep — not a great way to kick off a vacation.  Since we live on the west coast, even early morning flights don’t arrive midwest or east coast airports until late in the day (especially when making a connection) due to the time change.

Our latest tactic when flying east is to leave late in the day, arriving late at night, even midnight or later.  Our internal west coast body clocks are still 2 or 3 hours behind that time, and we can catch a few Zs on the plane if necessary.  Upon arrival, we crash at a cheap (but clean) airport hotel and get a full night’s sleep. That way we wake up ready to kick off our trip, feeling refreshed rather than run-down on day one of our trip!

Of course, overseas flights are a different story … on those, we try to get much sleep as possible.  No matter how we feel upon arrival, we immediately shift to local time and stay up until a reasonable bedtime — in Sydney, Australia we hit the pillows around 8 p.m. and were wide awake well before 6 a.m. — but after a few days, we began to adjust.

Money saving top-tip?
Make do with the old couch.  Seriously.

Dream destination?
One of those tropical resorts with private cabanas on stilts above turquoise water…

Here are 11 random facts about ourselves:

And finally, here are our 11 nominees for the Liebster Award:

Nominees – pick your favorite eleven questions from all of these to answer!

Visitors, take a minute to check out the great tips these bloggers have to offer!  We’re looking forward to hearing from these 11 bloggers and your replies as comments here as well.  Thanks again to Wayne & Elena and to Lisa for the nominations!

Enjoy your week or your weekend!

7 thoughts on “Liebster Award – 11 Random Facts About Us”