We had a fantastic week at Hawaii Volcanoes National Park with nephew Max celebrating his 13th birthday.  We have a lot of great adventures to share with you, and we’ll begin with our great day driving down Chain of Craters Road, an 18 mile stretch that goes from the crater rim down to sea level.  Now you may wonder how we spent a whole day on just an 18 mile stretch of road, but there’s a lot to see and explore in this short space.

Our first stop on this road was the Thurston Lava Tube.  It’s a little like walking onto the set of Jurassic Park there.  It’s a very lush tropical forest, with fern fronds that are taller than the people walking past!  Lots of birds were singing, and we did spot a few of the beautiful bright red apapane flitting through the trees (bird nerd alert), but for the most part we just heard the birds.  The path to the lava tube is just a 1/3 or a 1/2 mile loop on good trail (there are a few stairs on it).  The tube was made when a lava river ran through the area.  The outer shell cooled, but the rest of the lava ran through and emptied out, leaving this large cave-like structure.  The main part of the lava tube is lighted, so no flashlights are needed.  There is a second, unlighted part of the tube we were hoping to go into, and we had our headlamps at the ready, but it’s currently closed.  That was a little disappointing, I have to say. The cave is cool and damp and has some plants growing in/on it.  There used to be stalactites there, too, but people took them!  Apparently they never heard, “Take only photos, leave only footprints.” 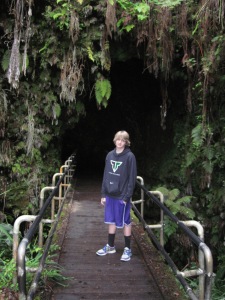 The entrance to Thurston Lava tube

Just across the street is  the Kiluaea Iki hiking trail.  We didn’t do the whole trail, but we did hike a little ways on it so we could look down into the crater, and we could see lots of hikers on the crater floor.  We were hoping to get down there to hike ourselves, but we ran out of time.  Next trip!

Since this road is called Chain of Craters, you might guess that there were many craters to see on the way down, and you’d be right.  There’s the Lua Manu, Ko’oko’olau, the Devil’s Throat, the Puhimau (word of the day!), and several others.  You might think it would get kind of boring stopping to look at all these, but it was actually really interesting, because they all had something different going on.  Some are all rock, some are mostly trees now, there are strange rock formations and many different colors.  All are pretty in their own way.

One of the many craters on Chain of Craters Road.

As we got a little farther down the road, we were more out in the open surrounded by fields of dark, dark lava.  We could easily see both kinds of lava, the more chunky ‘a’a lava (a very handy word for Scrabble, BTW), and the more ropy, “pudding-like” pahoehoe lava.  Often, both types were side by side.  Both kinds of lava are actually the same, but they cooled at different rates.  If you’d like a more scientific (but not too scientific) explanation of why they look so different, check out THIS article.  We got out and walked around in several places, exploring and examining.  We lifted big pieces of lava that were really not very heavy and of course threw some to see how it flew.  Walking on the pahoehoe is definitely easier. 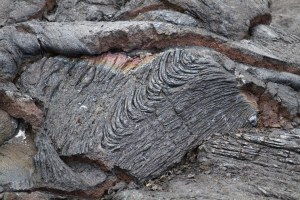 He lifts lava over his head with a single hand!

About two miles before the road ends there’s a pull out at Pu’u Loa Petroglyph Field, a sacred place for Hawaiians.  I think petroglyphs are pretty magical, and it was one of my favorite places on the trip. Nearly 23,000 petroglyphs have been found out at Pu’u Loa, and many of them are related to family traditions.  There’s a short hike out to the petroglyphs, and a little boardwalk at the main site to let you see them but to protect the site.

The road drops continually from the start (about 3,700 feet in all), and finishes right at sea level.  The temperature rises as you drop, too, so be prepared with water and also plenty of sunscreen.  It was windy while we were there, so it didn’t feel too hot, but we all had pink cheeks at the end of the day!  Reapply, reapply, reapply.  We had a picnic lunch under a covered shelter at the road’s end and then walked out to the edge of the cliff to see the magnificent Holei sea arch.  Sea arches are made when lava tubes get partially eroded.  Eventually they, too, erode away.  I wonder when that will happen to this arch.  It seems so sturdy! 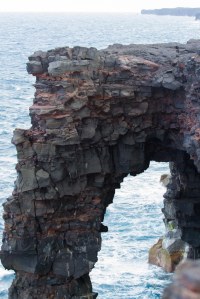 Last, we walked down the road 1/4 mile or so to where the lava had flowed all the way across the road.  This happened over a period of several years.  I so wish we could have seen it happening, but on the other hand, then we wouldn’t have been able to walk on it and explore it, so maybe it’s better this way.  Plus I think I might have been freaked about getting close to something that’s 2,000 degrees Fahrenheit and sticky…  While walking along this road we could also see a steam plume several miles in the distance where the lava is actively flowing into the ocean.  One of the most amazing things about this whole area is that even though the lava is many feet deep in places, there is still new life poking through, daring to grab hold and grow, despite all the adversity.  Pretty amazing! 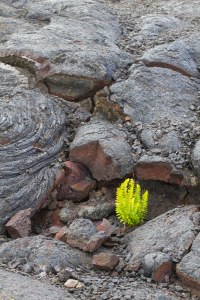 Plants take root wherever they can in this harsh environment.

We finished our day just in time, because the rain started up as we headed back up the hill!  If you’re looking for a really thorough milepost guide, there is a great one HERE.  Have you spent the better part of a day on an 18 mile stretch of road somewhere?  Let us know where in the comments.  Enjoy your week or your weekend! 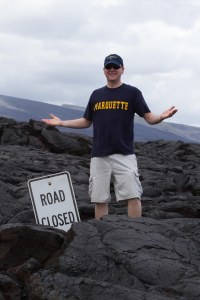