Did you know Kentucky Fried Chicken came from Kentucky? Huh!

In the fall I attended a conference in Louisville, Kentucky, a city with a lot to offer tourists. The downtown is lively with lots of restaurants, museums, bourbon tasting opportunities, and art, all in a very compact, walkable area.

As part of the conference I was able to attend a morning “backstage tour” at Churchill Downs, and it was a fantastic experience. Churchill Downs is just about 10 minutes from the downtown area, and our tour gave us the opportunity to learn quite a lot about the subculture of horse racing that I had no idea about. For instance, did you know that somewhere between 500-700 people LIVE at Churchill Downs full time taking care of the horses? Or that they can house around 1500 horses? Did you know there’s a job called “the hot walker”? So much to learn!

The tour also gave us the opportunity to see the horses during morning workouts right down at the edge of the track. It was exciting to watch these incredibly powerful animals up close, in all levels of training, being ridden by their trainers.

Museum entry was also included, and its exhibits are excellent. Even though I came in 6th (some might call it last) in the “ride in a horse race” interactive exhibit, it was probably my favorite part of the museum. The hat collection was fantastic. The farrier’s section was very interesting. How does one go into this profession, though, I wonder. The movie is awesome — don’t miss it. It’s a 360 degree film (sit in the middle if you can) which is very unique, and it presents historical information right up to the present.

Now THAT is a bat!

I was also able to visit the Louisville Slugger Museum, right downtown. If you’re at all a baseball fan, I highly recommend the Louisville Slugger Museum. It can be easily toured in an hour (½ hour is a guided tour through the factory). You get a chance to see (and touch) the different styles of bats used by many of baseball’s superstars, past and present, in the exhibit hall. On the guided tour, you get to see  bats being made and learn about the process from tree harvest to turning, coloring, and burning in the logo. Everyone who goes on the tour gets a mini bat to take home, you can even buy a personalized regulation bat should you be so inclined.

I didn’t realize that Muhammad Ali was from Louisville, but in fact he was, and the Muhammad Ali Center is downtown as well, right on the river. This museum is packed with information about Ali the boxer, Ali the activist, and Ali the humanitarian. There is a good orientation film, and all kinds of exhibits, including ephemera, articles, videos, and photos. You can posterize yourself in the Poster Pledge exhibit, hit the speedball, even get in the ring and take on Laila Ali. I only had a little over an hour to spend there on a lunch break, but I could easily have spent much longer, there was so much information. Muhammad Ali was a very passionate and inspiring person. The museum even offers a discount for teachers! 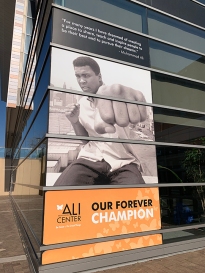 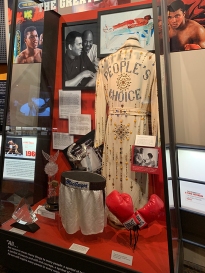 Bourbon tastings also abound, of course. I did have a bourbon drink, the Give Me S’more at Come Hell or High Water, a delightful downtown speakeasy, but I didn’t have time to take advantage of a distillery tour. My friend Jenny went to a distillery tour at Michter’s and had a great time. She got five tastings plus a cocktail. From her I learned that all bourbon is whiskey, but not all whiskey is bourbon. #themoreyouknow There’s a whole bourbon trail in Kentucky if that’s your thing. 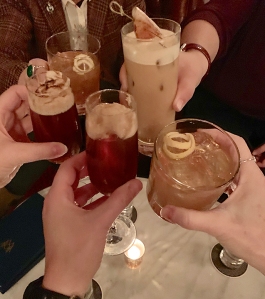 A few other things I enjoyed about Louisville were all the art (definitely check out 21c Museum Hotel) and the Downtown Civil Rights Trail. The website says that the Louisville Downtown Civil Rights Trail proclaims the often-overlooked story of those who endured and conquered segregation in Louisville, Kentucky. While many of the businesses that were picketed during the movement have been closed down, torn down or relocated, the legacy of those who participated in the demonstrations has been preserved through the placement of historic markers throughout the downtown area.

I had a fabulous four days in Louisville, and it’s a place I’d definitely recommend for a visit. There’s lots to do, see, explore, and even drink!

We wish you a happy new year and hope you get a chance to explore a new place soon, too, whether it’s for a week or a weekend!