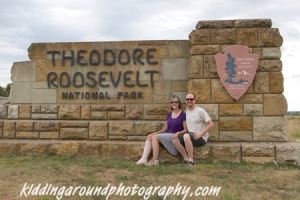 When we mapped out our summer road trip, we planned to spend four relaxing days and three nights in beautiful Theodore Roosevelt National Park in western North Dakota on our way back to Oregon from Illinois.  We were going to camp, look for wild horses and bison, take some photos that would hopefully win the TRNP photo contest that was in process, and do a bunch of hiking.  And then I broke my foot, putting a bit of a crimp in the plans.  I was determined that we weren’t going to skip the park, though, (after all, it was to be number 42 in our quest to visit all 59 US National Parks) and I hoped we’d still get to do some of the fun things we’d been looking forward to. 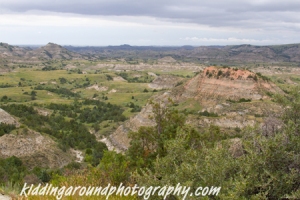 Teddy Roosevelt National Park overlook where Jeff nearly launched me out of the wheelchair and right over the edge!

We arrived at the park on a stormy morning — bad weather was also not part of the plan — and decided to explore the visitor center because it was small, dry, and seemed manageable.  Even being small, it might not have been all that manageable, but miracle of miracles, they had a wheelchair there, and they said we could use it!  I was reluctant to use it, but it turned out to be one of my favorite memories of that park.  Jeff wheeled me along the paved path down to Teddy Roosevelt’s cabin where we could look in the windows and then along the overlook path that looked onto a beautiful valley.  When we got to the far end of the path, the rain started pelting us, and that’s when the fun really started.  Jeff started running, and I was bumping along, sure at any moment I was going to be catapulted out of the chair like a scene in a bad movie.  I started laughing and didn’t stop until long after the ride did.

You can barely even see the car over these guys’ backs! Teddy Roosevelt National Park

Although I knew it would be difficult, I was determined to try camping at the park at least for one night.  We chose Cottonwood campground, since we were traveling in the south unit of the park.  As we arrived at the turnoff, we saw lots of cars stopped in the road, so we figured there must be some wildlife nearby.  And it was nearby alright.  A huge herd of bison were grazing near the road and crossing right into the campground.  We could hear them snuffling and snorting and chewing, and we sat for probably a half hour just watching.  They’re quite used to cars, so they just go on doing their own thing, which makes for great wildlife viewing.  It’s amazing how large they really are.  Even next to our van, they’re BIG!  Seeing them next to a Toyota Prius is almost comical.

Nope, there’s no way I’m outrunning this one!

Finally we turned into our campground and drove down the entrance road v-e-e-e-e-e-ry slowly as the bison meandered in the same direction.  We toured through and saw that there were two handicapped sites available in the campground.  Although we didn’t have a handicapped permit, we asked the camp hosts if we could have special permission to stay in one, and thankfully they said it was fine.  The handicapped sites in this campground were paved and the site we were in even had a very short paved path directly to the bathroom.  Those details were super helpful to me, and gave me a whole new appreciation for the Americans with Disabilities Act.  And speaking of paths and wildlife, the site we were in was also apparently on the path of a certain wild horse who came walking right through our camp as we sat down for dinner.  It was one of the closer wildlife encounters I’ve had, and one of the only ones where I was actually scared, although I really had little reason to be afraid.  I just remember thinking, “That horse is getting closer and closer to me, and I cannot even get up and run away.”  But I was also thinking, “There is a real live WILD HORSE in my campsite!  How cool is that??!!“ 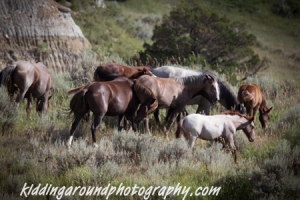 The next morning we decided we’d just spend the rest of that day touring the park and then head toward home because camping with a broken foot turned out to be a little more challenging than fun, and I wanted to break up the long drive home a little bit so our travel days could be shorter.  We went for a driving tour and saw two bands of wild horses.  At first we just saw one or two horses and then as we moved forward in the car we could see more and then even more.  One thing we learned when the wild horse came in our campsite (did you read that? A wild horse came in our campsite!) was that while the horses looked beautiful from far away, they might not be quite so beautiful up close.  The horse that came in our campsite had a lot of ribs showing and several scars.  In one of the bands, a white horse was rolling around in the dust.  It looked like it was having fun, but I read that it was probably just trying to get the flies off.  Um, ick.

Just before leaving the park we stopped at a second visitor center and had a birdnerd alert.  We saw something bright blue flitting off in the bushes at the edge of the parking lot.  It turned out to be a Lazuli Bunting!  That was another great moment and a pretty nice way to leave this park.  This part of our adventure was a reminder that sometimes travel is pure fun every day, and sometimes it’s just moments of joy.  When traveling gets hard, try to focus on those moments of joy.  You can almost always find them, just like we did at Teddy Roosevelt National Park, broken foot and all.

Enjoy your week or your weekend, and please hold the handrails going down the stairs!

Yes, that is a WILD horse in our campsite (on the right!) 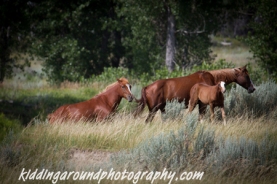 Snoop’s keeping his hands and feet inside the vehicle at all times.

Baby bison and a big one! Teddy Roosevelt National Park

2 thoughts on “Moments of Joy in Theodore Roosevelt National Park”